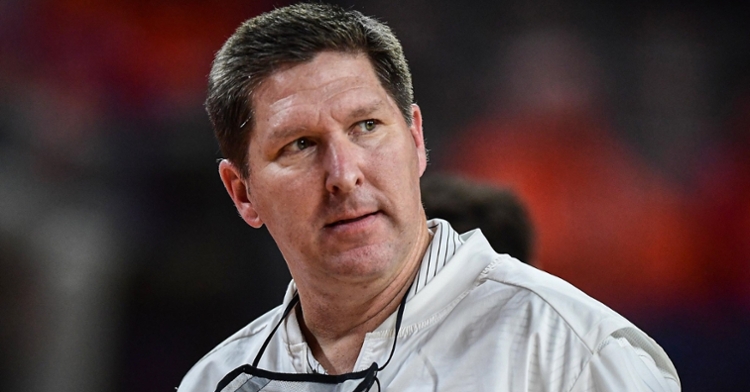 Brownell's Tigers are in the midst of a three-game losing streak. (Photo courtesy ACC)

The Tigers were on the wrong end of an 80-61 score against Florida State at the Tucker Center in Tallahassee, Florida. The game wasn’t as close as the final score indicated – Clemson went on a 23-7 run to end the game against Seminole reserves after trailing by as many as 35 in the second half.

The Tigers have now lost their last three games—to No. 13 Virginia, Georgia Tech and the Seminoles—by a combined score of 248-176.

Clemson (9-4, 3-4) shot 30.4 percent from the floor, and Florida State (9-2, 5-1) tallied a field goal percentage of 48.3 while knocking down 12 3-pointers. The Tigers were an impressive 22-for-26 on free throw attempts. They also grabbed 32 rebounds and notched 25 bench points. John Newman III led Clemson in scoring with 12 points to go along with his four rebounds. Chase Hunter shot 4-of-7 from the field and chipped in nine points. FSU's Balsa Koprivica recorded a double-double with 13 points and 10 boards.

Brownell said his team needs to get its confidence back after playing “uphill” the entire game.

"Florida State is a hard team to beat. When you're shooting as poorly as we did, it's impossible for us. I actually think we got a lot of good looks in this game,” Brownell said. “You need to be ready to knock shots down, though, but we couldn't make one, and that's demoralizing.

"Our team needs to regroup. We need to get our confidence back. This game was different from the Georgia Tech game, when we turned it over a lot. We turned it over only 12 times and made 22 free throws, but consistently shooting and missing shots puts a lot of pressure on your defense. We were playing uphill the whole game."

Brownell said his team can’t get into scoring contests with some of the ACC’s better teams.

“Our team is not good enough that we can get into a scoring contest with some of these teams,” Brownell said. “Our defense has to be better. The game was really hard tonight from the standpoint that we had to go against Florida State’s set defense. They played well. They made some threes. We were struggling and so they were constantly playing in transition against us.

Clemson shot just 30 percent from the field (17-56) and was an abysmal 5-for-30 from three-point range, but Brownell said he thinks the Tigers had open looks at the basket.

“I am interested to watch the tape. I thought we got a lot of really good shots,” Brownell said. “I know we took a lot of threes, but they force you to do that some with the way they guard. They get into the ball, make you penetrate a little bit and then come running to help and you have to be able to make quick decisions and kick (the ball) out and move it. Guys have to be able to make some shots and we did not do that.”