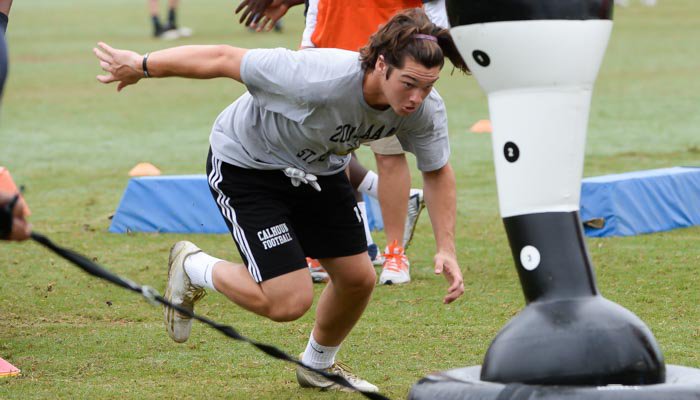 In anticipation of becoming a Clemson Tiger, legacy recruit Baylon Spector is hitting the books – and the weights – with a fury.

Spector – a 6-foot-2, 215-pound linebacker who has played on both sides of the ball for Calhoun (Ga.) High School – plans to enroll early at Clemson University next January, joining several other 2017 recruits in getting a jump start on academics and spring practice.

To achieve that goal, he is taking both junior- and senior-level courses this semester. He also has ramped up his workout regimen and added 10 pounds since committing to the Tigers in August. Spector said defensive coordinator Brent Venables, his primary recruiter, envisions his playing weight as being around 225 pounds.

“Right now is my hard semester, because I'm doubling up on my classes,” Spector told TigerNet by telephone recently. “I work out every day after school. I have half of my senior classes one day, and then I have all of my junior classes the next day. Schoolwork's pretty busy right now, but it's alright.”

And the Clemson coaching staff's plan is for Spector to play outside linebacker, though for the defending state champion Calhoun Yellow Jackets he has played at multiple positions including free safety, wide receiver, quarterback and kickoff returner.

In many respects, the decision to commit to Clemson was a no-brainer for Spector. His father, Robbie, played wide receiver for Clemson from 1987 to 1990, and the aspiring linebacker grew up attending many games at Death Valley.

“Clemson has always been my dream school, I guess you could say. I've always wanted to go there, since I was little, Spector said.”

Though he fielded offers from schools including Duke, Wake Forest and Georgia Southern – “I wanted to see how my recruitment would play out,” he said – the versatile three-star athlete knew when attending the 2015 Dabo Swinney Football Camp that he wanted Tigertown to be his destination. After an impressive showing at that camp, Clemson extended Spector an offer, at which point he jumped as if batting down an opposing quarterback's pass.

“That's where I knew I wanted to be all along, I guess you could say,” he said. “I guess once I committed, my recruitment just slowed down a lot.”

This year the Tigers will be aiming for a sixth consecutive 10-win season – and quite possibly a seventh during Spector's freshman campaign. But such rarefied air is par for the course for Spector, who hails from a program that's accustomed to winning. Under head coach Hal Lamb, the Yellowjackets have amassed 11 straight region titles and marched to the Georgia state championship year after year, winning or finishing runner-up at both the AA and AAA levels.

Lamb said Spector's desire for victory and proven versatility are just a couple of the intangibles that make him a special talent.

“Baylon is a tremendous athlete with great size and speed,” Lamb told TigerNet in an email interview. “His most important asset is his competitiveness. He loves to compete and he loves to win.”

As a sophomore, at quarterback he was 25-for-38 passing, for 447 yards and six touchdowns. On defense, he registered 71 tackles and an interception.

For his senior season, Spector said he'll probably concentrate on defense and sharpen his skills at outside linebacker.

“The goals are pretty much the same as every season,” he said. “The goals we have are the goals we've had set for a while now: Make it to the state championship.”

Spector said he looks forward to early enrollment at Clemson next January.

“That will help me a lot, just getting in there with the older guys and have them help me out,” he said.

Spector remarked that the talent level of his class is astoundingly high, and that they're all getting to know one another by via an online group chat.

“Overall, as far as recruiting, Clemson's only getting better,” he said. “I'd say this recruiting class will be among the best in the country.” And, he added, “they're all pretty cool guys.”