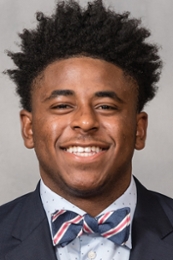 2018: Appeared in nine games … credited with two tackles in eight snaps in the season opener against Furman … played on special teams in an additional eight games.

2017: Had two tackles, both on special teams, in four games … had two special teams tackles against The Citadel on Nov. 18.

Personal: Father, Regan Upshaw, was the No. 12 overall selection of the 1996 NFL draft by the Tampa Bay Buccaneers and played nine seasons for five teams … majoring in economics … completed microinternship with WH Trucking in 2018 … born Nov. 20, 1997.