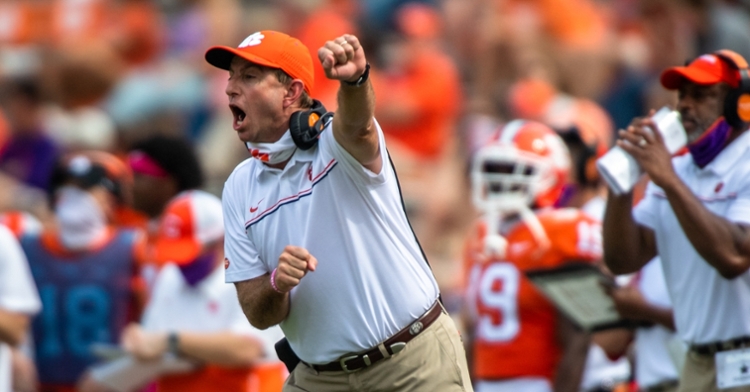 Swinney reacts to a play during the win over Syracuse. (Photo courtesy of ACC)

Clemson head coach Dabo Swinney met with the media Sunday evening to recap the win over Syracuse and look ahead to this week’s game against Boston College.

Clemson hosts Boston College at noon next Saturday on ABC. The Tigers (6-0 overall, 5-0 ACC) have opened as a 32-point favorite over the Eagles (4-2 overall, 3-2 ACC). Boston College defeated Georgia Tech 48-27 Saturday to pick up its fourth win over new head coach Jeff Hafley.

SWINNEY NOTES FROM THE CALL

*Never as bad as it seems and never as good as it seems. Hard to win, just a few undefeated Power 5 teams that are out there unless they’ve played just one game.

*The first five games they played complementary football and yesterday against Syracuse had to compensate for each other. They had to fight through it and good teams can overcome mistakes. The guys played hard and there were a few bad plays, some glaringly bad plays that were costly.

*Felt like it should have been 27-0 at halftime but mistakes made it 27-14. Loves how his team fought before the half to drive down and score points. No panic at the half.

*Clemson is 106-2 (going back to 2011) when leading going into the fourth quarter. He said that says a lot about the program. They are 6-0 and still growing and still developing.

*Swinney says the offensive line has played well all year and they’ve played hard all year but had some moments Saturday where one or two guys would be off-schedule and it would cost them. Still, he says the team did a lot of good things. There are things they can teach off of. All correctable things, nothing that really worries him, some technique things in the secondary.

*Return game has been good this year, both on punt return and kick return. Lot of things to be proud of. Not the best game to this point but gives Syracuse credit because they played really hard.

*He was around BC's Hafley at the bowl game last year when he was the defensive coordinator at Ohio State and talked to him once or twice. They have been on calls every week since March and he feels like he knows him well because they’ve been on calls every week. He said Hafley is a great coach and the Eagles are playing with extreme confidence. The Virginia Tech game got away from them a little bit but they played UNC close. He said the Tigers will have their hands full, a team that is playing with confidence and believes.

*On the injuries, he doesn’t have an update but hopes they will all be able to get back in there this week. Too early to tell right now.

*Back to the O-line, just inconsistent up front. Communication issues and some bad penalties. Miscues. They are aggressive and will always mix it up and built to take what people give them offensively. They can throw for 500 or run for 500.

*No new injuries to speak of from the game yesterday. Got Darnell Jefferies back yesterday. They held Regan Upshaw and Derion Kendrick and James Skalski and Tyler Davis, three being starters out on defense. Jake Venables and Baylon Spector did a great job. Said all of the linebackers did a great job. Tyler Venables was in on a bunch of tackles despite playing just 16 plays.

*Boston College is a mix of their new scheme and old personnel. Not sure who they will be, but they get into 12 personnel (one RB, two TE) a lot. They have been throwing the ball all over the place and not really running the ball but then go off for over 200 against Georgia Tech.

*Swinney thinks Lyn-J Dixon had a good day, got some dirty yards and had his best day. Chez Mellusi didn’t get much of an opportunity but has been a guy they have confidence in. Darien Rencher always finds a way to get five yards. Kobe Pace is really coming on, trying to put it all together from a pass-protection standpoint. He has to figure out some schematic-type things. He is a very natural runner and will be a great player, a smooth guy, a big guy, that can change direction. He is very poised. Mikey Dukes was banged up and really didn’t practice last week and didn’t play.