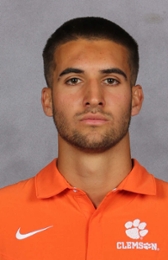 Defender
B I O
Before Clemson (UNC Greensboro): Played in 18 matches and made 17 starts … Scored four goals, handed out seven assists and finished with 15 points, which was second on the Spartans …. Was second on the Spartans with seven assists … Had two assists in a win over Radford … Named to the College Soccer News Team of the Week after scoring a goal and recording an assist against Furman in a 3-0 win … Was a first-team All-SoCon selection … Led a defense that posted 10 shutouts …. Scored first collegiate goal and recorded his first assist during a 2-0 win over Gardner Webb … Named to TopDrawerSoccer.com’s Top Freshman List, ranked eighth … Tied for third in the SoCon in assists (seven), fourth in assists per game (0.41), tied for fifth in game-winning goals (two), ninth in points (15), and 10th in points per game (0.88) … Had an assist in three consecutive matches against Radford, Clemson, and VMI … His goals against Gardner-Webb and Winthrop were game-winners … Was one of 12 UNCG players with multiple goals … Played every minute of UNCG’s final four games … Helped UNCG win the Southern Conference regular season championship … The Spartans ended the season as the national leader in corner kicks per game (8.00), goal differential (38), points per game (8.39), scoring offense (2.89).