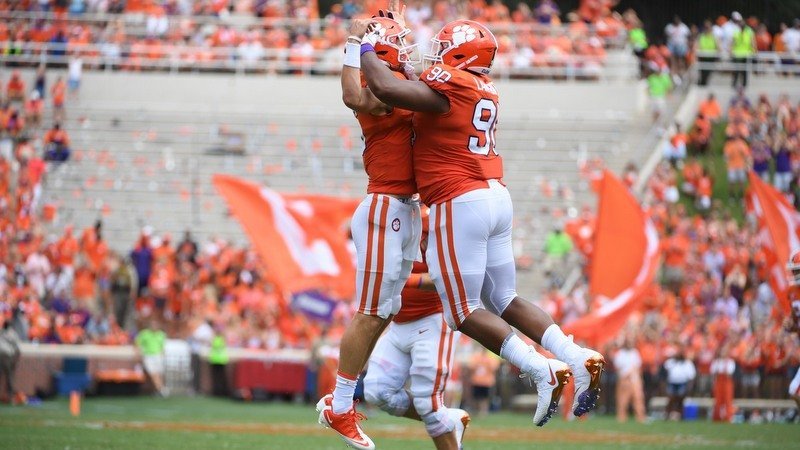 Lawrence has made quite an impact early, ranking No. 8 nationally in pass efficiency.

Clemson coach Dabo Swinney appeared on ESPN's SportsCenter for a one-on-one interview with Stephen A. Smith about the quarterback news this week.

Smith asked Swinney about the criticism over moving a senior in Kelly Bryant to the bench, after what Bryant accomplished in helping lead Clemson to the Playoff last year.

"I would just say, 'It's not that simple.' You start over every year," Swinney said. "You recruit great players every year. It's no different than what you see all over the place. You have new freshmen come in just like when Christian Wilkins got here (as a freshman) and he was a starter and beat out a lot of veterans...When Deshaun Watson came here, a couple games in he beat Cole Stoudt. I love Cole Stoudt and he was a senior and was committed and had been a great backup for us. Done a lot of good things.

"At the end of the day as coaches we have to evaluate and make critical decisions that we think give us the best chance to be successful. And when you make decisions, there will always be criticism. People who don't agree with that decision. Especially if it doesn't go the way they want it to go. But Trevor Lawrence has earned this opportunity. Through four games, he's earned it.

"Yeah, last year's great, but it's all about this year. Everybody has to earn it all over again. Right now I think Trevor Lawrence gives us the best chance because of his productivity through four games."

Swinney went on to compare Lawrence to what he saw out of the former All-American and national champion Clemson QB Watson.

"I have no doubt that if he stays healthy," Swinney said. "He'll leave Clemson as one of the best who has ever come through here."