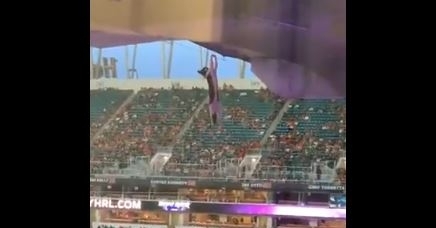 This kitty was not in the best situation on Saturday night

You can't make this up.

A cat fell from the upper deck during Miami's game against App State on Saturday night.

The feline dangled for a few moments as fans gasped in the impending doom.

Good news, though, as the kitty fell straight into the arms of a few Miami Hurricane fans holding an American flag and a towel on this 20-year anniversary of 9/11.

According to a report, a Miami couple caught the cat and said they got peed on by the feline in the excitement after the catch.

So many questions, but mainly why are there cats in the Upper Deck of Hard Rock Stadium? Anyways, great job by the fans below who certainly made the viral video have a very happy ending.

Check out the amazing video below (PARENTAL ADVISORY WARNING):

A cat fell from the upper deck during Miami's game and was caught by fans who held out an American flag.

WILD scene in Miami as heroes with a towel save a cat from injury after it fell from the second deck. pic.twitter.com/vcP0e4RhSO