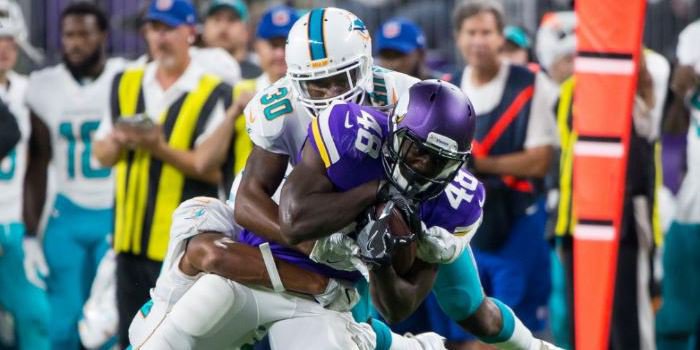 He did well enough that he's starting this Sunday at home versus Tennessee (1 p.m.), Miami coach Adam Gase announced Monday.

Tankersley was targeted early and often in the 20-0 loss, totaling five tackles and a pass breakup.

“I just took it and ran with it,” Tankersley told reporters. “There’s not too many opportunities you’re going to get. So I just took the opportunity and run with it. I was excited. You’re always going to be excited getting your first start, especially against a great quarterback like Drew Brees. So I was pretty hyped.”

Tankersley said Brees had a word for him after the game.

"(Brees) said he liked my competitiveness," Tankersley said to reporters Monday. "So just hearing it from those guys gave me a lot of confidence."

Miami's Gase said Tankersley did "what we were hoping for."

"We wanted to be careful because he hasn’t played a game in a month," Gase told reporters, referring to Tankersley's last action in the preseason. "We thought we had a good plan going in and it changed before gametime. He’s really what we’re looking for. We like the tall, long corners that come up and press and play physical at the line of scrimmage.”

Tankersley, a Beech Island native, was a semifinalist for the Jim Thorpe and Bednarik awards as a senior and made first-team All-America on teams from USA TODAY and Pro Football Focus. The 6-foot-1 corner totaled 65 tackles, four interceptions, 11 pass breakups and six tackles for loss over 15 starts last season.

Tankersley played over 1,900 career snaps with the Tigers with 30 starts in 55 games, which was the most appearances of any in his 2016 senior class.