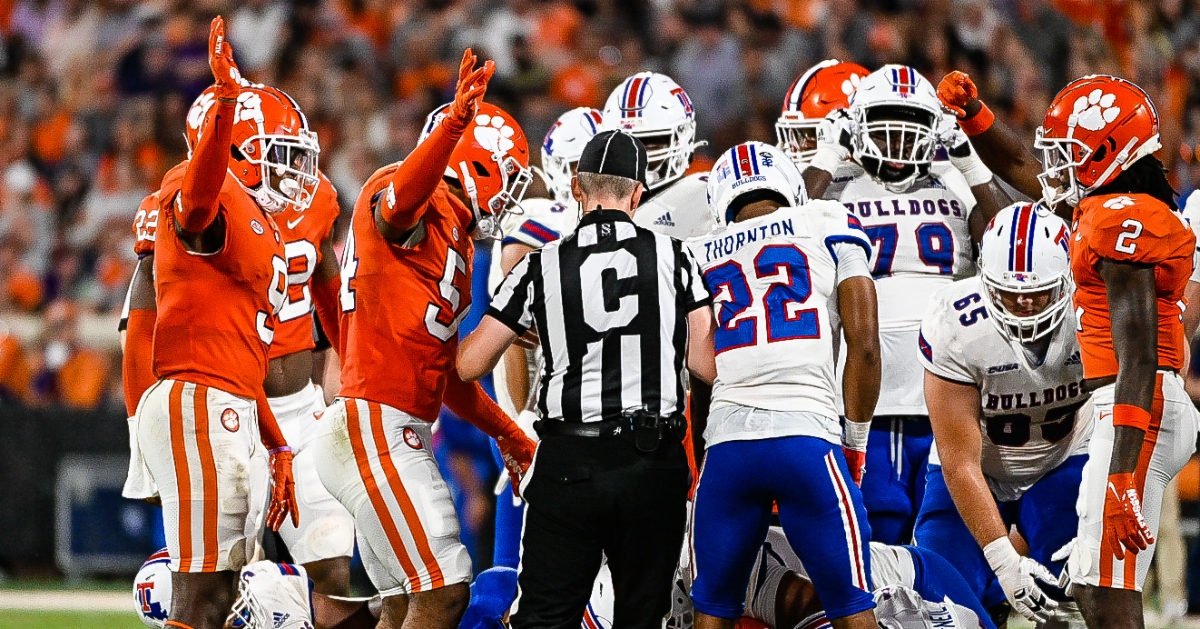 CLEMSON – Wes Goodwin thinks his defense improved from week two to week three, but he also knows there are still plenty of areas that need work.

Clemson’s defense gave up 20 points on 317 total yards to Louisiana Tech Saturday. The Bulldogs rushed it 21 times for just six yards, one of the bright spots in the win. Goodwin, speaking to the media after the game, said every game is a chance to teach and he thought it was an improvement over the previous week’s game against Furman.

“I definitely do. It’s a great opportunity with five starters out for a lot of guys to get some crucial playing experience no better teacher than on that field,” Goodwin said. “It was good to see them go out and compete. Obviously, not perfect. A lot to coach from and clean up. Good to see those guys go out there and lay it on the line.”

Another bright spot? The Tigers forced the Bulldogs into four turnovers, and three of those led to 21 third-quarter points.

“Throw in a fourth-down stop as well-- and a blocked kick. That was awesome to see,” Goodwin said. “We are trying to improve our pass defense every week and get better with that. We had 12 pass deflections which is the most since Coach Swinney has become the coach. Just a great job getting our hands on some balls with deflections. We need to clean up the big plays-- gave up way to many big plays.”

The defense was without secondary starters Andrew Mukuba and Nate Wiggins, and starting cornerback Sheridan Jones left the game early with an injury. That forced younger players like Toriano Pride, Jeadyn Lukus and Sherrod Covil into the fray.

“They competed and played with great effort. Great experience for them, and they will continue to grow,” Goodwin said. “We will need them throughout the season. We need them to continue to get better and better every week. They’ve been focused this week during practice. It was cool to see them go out there and translate it to the field. Not perfect-- by any means-- lots to correct and coach from.”

The defense allowed too many chunk plays in the passing game - Louisiana Tech completed eight passes of 19 yards or more against the Tigers.

“We were just trying to keep our coverages multiple and stuff,” Goodwin said. “It was a couple in each of our coverages. Credit to them for executing. Just a lot to improve on-- our technique at the line of scrimmage or losing leverage downfield. Continue to coach and correct and teach.”