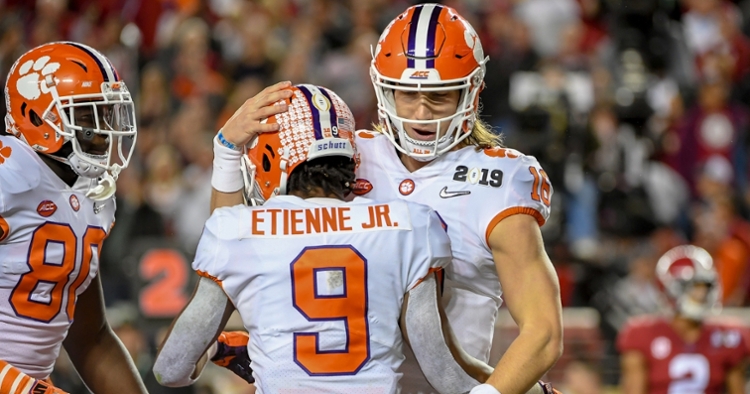 Elliott says that Lawrence and Etienne are great human beings.

Clemson offensive coordinator Tony Elliott says Jacksonville is getting two great football players in quarterback Trevor Lawrence and running back Travis Etienne, but the city and the franchise are getting even better human beings.

Lawrence and Etienne were both selected in the first round by the Jacksonville Jaguars in last week’s NFL Draft, and Elliott said this week that Jacksonville has no idea what they’re getting.

“It was good and unexpected. I thought both were going to go in the first round but to see those guys go together and to see them have a chance to impact an organization and the community is great,” Elliott said. “They are both outstanding football players but they are even better human beings and that is what makes it so special. They are both top-notch guys and they are going to give you everything in the locker room and on the field but they are also going to be invested in the community.”

“I think it's a combination of ability, humility, and then just seizing the moment. Everyone knows how talented he is but he brings an unbelievable amount of intensity,” he said. “He is a guy that can get fiery at times, but when he comes to practice every single day, he is taking a game rep. As a coach, you are always trying to find a way to encourage a guy to have that intensity and he walked through the door with that intensity. What he chose to do here at Clemson was to totally immerse himself into the total program and not be one-track-minded and being focused on the next step.

"But he was able to become a great teammate and a great leader, especially when college football and the community and the country needed him to step up. He is just the total package.”

Elliott then said that Etienne is not the back he can be – he has the chance to be even better.

“The thing that is so awesome about him is that he hasn't hit his ceiling yet. He still has more room to grow and develop and the future is very, very bright for him,” Elliott said. “And I think some of the comments made about him is a reflection of him standing next to Trevor Lawrence and all of the attention goes to Trevor. But I guarantee you that if Travis was in a situation where it was just him, he wouldn't be considered a backup running back in the NFL.”

Lawrence appears to be one of the most ready-make quarterbacks to come along in a long time, but Elliott said Lawrence also has room to grow.

“I think there will be a learning curve for him transitioning to the next level. At this level, we tried to prepare him for that, but I think there will still be a transition,” Elliott said. “I think his experience over time of being in the spotlight and managing that, and being able to figure out the proper demeanor to have and to be able to translate that, he will be able to figure out things pretty quickly. He understands that all eyes are going to be on him and they will be watching every single move. He accepts that challenge and I think that will give him the ability to stay calm. That will translate to the players around him and I think that is what will elevate the play of the guys around him.

“We had to ask ourselves, what more could we do to help him? He understands the big picture and he understands the details and he prepares like a pro already. What we challenged him with this season is just maintaining his footwork in the pocket. He has to take that to the next level and make sure he's not moving too much in the pocket and not forcing the ball down the field when he doesn't need to, which he did a little bit of as a sophomore. But those are the areas where we challenged him to grow. And on top of that, we told him, 'Stay who you are.' But he was able to remain who he is.”