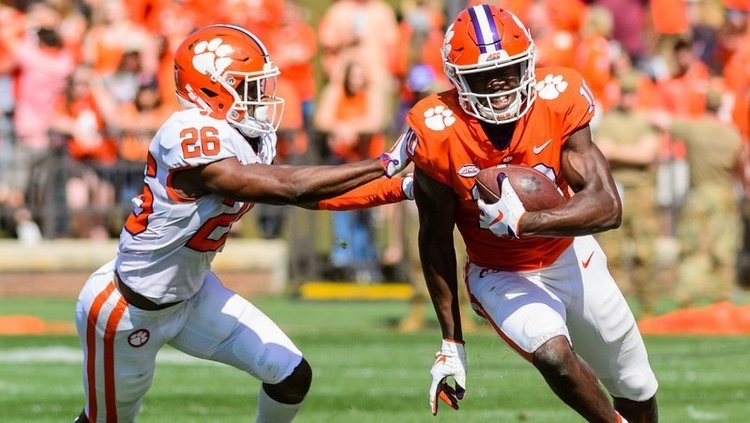 CLEMSON – Saturday’s spring game was a day for the kids.

Head coach Dabo Swinney more than once called players like wide receivers Joseph Ngata and Frank Ladson high school players, a nod to the fact that the Tigers’ large class of mid-year enrollees should still be in high school.

Ngata made a 70-yard catch-and-run for the Orange team on Saturday (from Trevor Lawrence), while Ladson had a 42-yard catch for the White team in the White team’s 30-10 victory at Death Valley in Clemson.

“Y’all have heard me say many times — I’m not trying to keep a secret on those guys — they’re ready,” Swinney said after the game. “They’re really, really talented players and very coachable. Just love to prepare, high-character guys, as is (Brannon) Spector. He’s going to be an outstanding player.”

Ngata and Ladson both entered Clemson at an elite level, according to Swinney.

“Those guys are just what we hoped they would be,” Swinney said. “Frank and Joseph are pretty elite as far as just where their starting point is. They’ve got a ways to go, but their starting point, it’s pretty impressive what I’ve seen from them this spring.”

On the defensive side of the ball, cornerback Sheridan Jones stole the show.

The defensive back led the White team with seven tackles, plus he returned an interception 42 yards for a touchdown in the fourth quarter.

“Sheridan’s feisty. He’s one of those kids that is just incredibly focused, whether it be academically, strength and conditioning, nutrition, learning the playbook,” Swinney said. “He’s a very focused young man, and he’s going to be a great player,” Swinney said. “He’s got to have a big summer in the weight room, but he plays big.

“Plays a lot bigger than he is. He’s got great size and he can run. Y’all saw him run — he went and ran Ngata down. He’s fast. But really proud of him.”