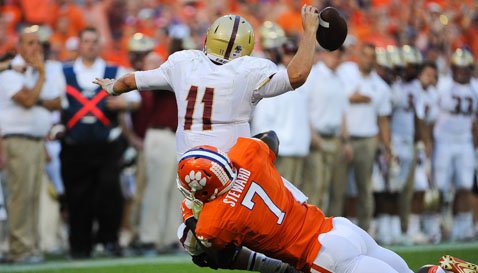 Stephone Anthony
Sr. Linebacker
#42 6-2, 235
Polkton, NC
View Full Profile were two of the crown jewels of the 2011 recruiting class, and the hope was that the two playmaking linebackers would play side-by-side for at least three seasons before heading to the NFL.

Anthony has gone on to become one of the conference’s best linebackers and will be on the radar of many NFL scouts this season, while Steward has battled injuries. Last season, Steward was finally healthy but had to play behind senior Spencer Shuey

This season, Steward will battle the hard-nosed Ben Boulware

Ben Boulware
So. Outside Linebacker
#10 6-1, 230
Anderson, SC
View Full Profile for the right to play, but through it all, Steward has never sulked and never complained, and head coach Dabo Swinney

Dabo Swinney
Head Coach
View Full Profile says that Steward has proven to be a man in all phases of his life.

“He comes here and gets five games into his freshman year and then he’s hurt again,” Swinney said. “So you miss two whole springs in a row and you have a setback from that. I am proud of him. That is my answer. He is a man. Tony Steward – who knows what will happen for him in football. He is a full grown man and has a toughness to him that you don’t see many people have. He has persevered. He has had to go through a lot and he has come through it. He has come out of it stronger.”

Swinney said that Steward has never stopped working, even while playing as Shuey’s backup.

“I am proud of his work ethic and I am proud of where he is mentally and physically,” Swinney said. “It does your heart good, to be honest with you, to see a guy claw and fight and persevere. Then he is fully healthy and then you have a guy like Spencer Shuey who just isn’t going to give it up. But he is good and has been doing a good job out there and this is a big opportunity for him. “

Steward told TigerNet back in March that while the journey hasn’t been easy, he hopes it’s his time.

“It’s been a pretty tough journey,” Steward said. “But you have to weather the storm, you know? Whether this time is my time or somebody else’s time, I am just lucky to be here and enjoying my opportunity. I want to make the most of it. Hopefully, I can make it my time.”