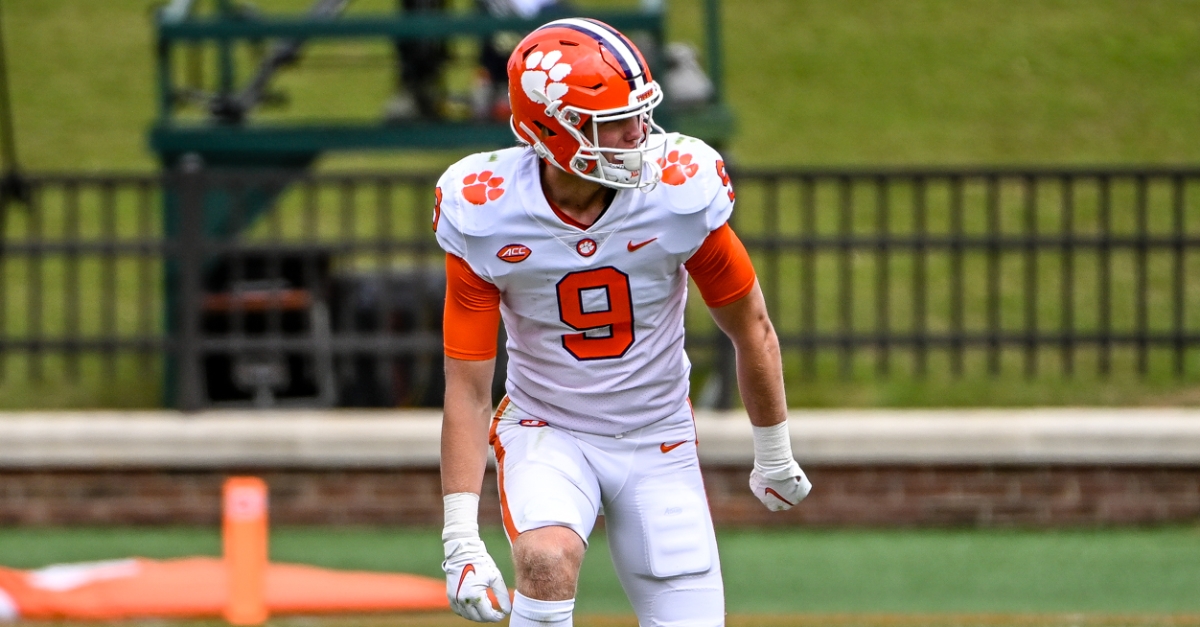 Kyle Richardson is looking for consistency from the former No. 1-rated TE prospect Jake Briningstool.

CLEMSON – With a mixture of size, athleticism, youth, and experience in his tight end room, first-year Clemson tight ends coach Kyle Richardson couldn't have stepped into a better situation.

Richardson – who has been on Clemson's staff since 2016 – was named to the on-field position when Tony Elliott left for Virginia. With guys like Luke Price, Davis Allen, Sage Ennis, Jake Briningstool, and Josh Sapp, he couldn't be more excited about his first group.

"We got four guys in the room right now, and all four guys can play and have played," Richardson said at Clemson's media day last month. "You got Davis Allen. You got Sage Ennis, which we've already talked about. You got Luke Price, who's the grandpa in the room. He's going on year six. He's challenging me for as much time in the building as I've had. But you got Luke, who's played a ton of football here as a walk-on and earning the scholarship. And then you got Sage, who was young last year and had to be thrown into the fire at times. Now you got those four guys that's got all different levels of experience. And all four of those guys bring something different to the table. What we have to do as coaches is find ways to mix and match their strengths in order to make our offense go.

"Going into fall camp, everybody in the room, there's going to be eight guys in that tight end room, and they're all going to be in fall camp. I'm looking forward to working with all of them and putting those pieces of the puzzle together and how we're going to use those guys. We got a good group of depth, and that's something that obviously last year we started running out of that position. So it's going to be fun to be able to work with those guys."

Allen and Ennis played through injuries last season, and that commitment to their teammates and their coaches is what immediately stands out.

"Davis had a shoulder injury and played through it throughout the season. Sage had a knee injury and again played through that injury throughout the season," Richardson said. "It just shows you how tough this group of tight ends are. They were banged up the entire season. Obviously, you lost Braden (Galloway) for the year, and then you turn around, and Davis is hurt, Sage is hurt, and they still finished all the way through Iowa State, and they were not close to 100%.

"And as soon as the season is over, they go and get those injuries taken care of. But again, it shows you how tough this group is. But it also shows you the commitment that these players have to football, to this coaching staff, to this program, and everybody - the fans and everyone else involved. It would have been very easy for them in a rough year to go, 'You know what, I'm going to go get fixed, and then I'm going to be ready for spring ball. I don't want to go through this pain to finish this season.'"

"Biggest thing with him is just consistency. He's a young guy that kind of got thrown into the fire at times because of injuries and probably was not ready at times. But his potential is through the roof. His athleticism and what he brings to the tight end room and opposing defenses in terms of matchup problems is through the roof. He's just got to be more consistent, and that's normal for a guy like him.

"A guy that's a big-time recruit and dominates so much in high school, and then they get here and think it's going to be just as easy as that. What happens is you get here, and it's like, 'Oh everybody was as dominant as I was in high school.' So he's just got to get consistent. He got banged up a little in the spring, but he's come back from that well. All the reports from the weight room, I'm pleased with everything he's doing right now. Excited to see what he does in year two. He's got a chance to be special.

"He's more of a receiving tight end, but don't sleep on Briny's physicality and don't sleep on Briny's meanness. He played defense in high school, and he's very physical and nasty. He's got that mentality that I love at tight end. So don't think he's just going to line up and run routes and be pretty out there on grass. He gets in the box and mixes it up."

"He looks great. He took the summer seriously. We are not into workouts with them yet, but he jumped right into the classroom and is figuring it out on the run. Excited about being able to get my hands on him and work with him in August."