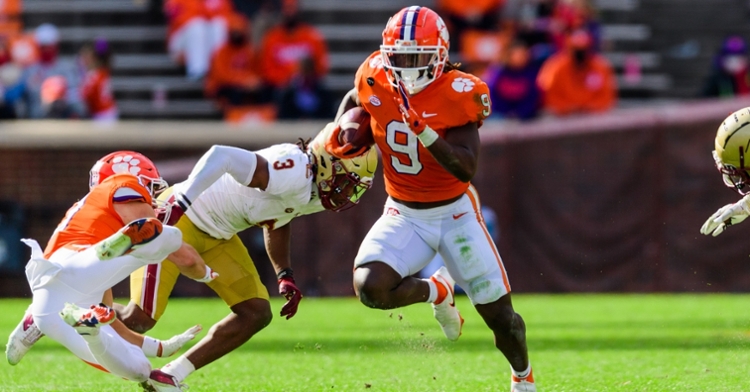 Etienne is expected to be a cornerstone with his college and now pro teammate Trevor Lawrence.

The Jacksonville Jaguars took two Clemson Tigers in the first round of the 2021 NFL draft. Just like that, Tigers fans became lifelong Jaguars fans. To learn more about what we’re getting ourselves into, we re-connected with Ryan O’Bleness at Big Cat Country who we interviewed prior to the draft about Trevor Lawrence and the Jaguars. Now we’ll focus on Travis Etienne and how he’ll be utilized in Jacksonville.

Kantor: Even though Etienne is widely viewed as an elite and versatile talent, Jacksonville has been criticized by some for taking a running back in the first round. Why is it such a de-valued position in the NFL?

O’Bleness: The reason for the criticism is that in today’s NFL, it usually isn’t necessary to draft a running back highly because teams can often find talent at the position in later rounds, or as the Jaguars are well aware, in undrafted free agents. Last year, undrafted free agent rookie James Robinson from Illinois State seemingly came out of nowhere to not only win the starting running back job for the Jaguars, but then broke the undrafted rookie record for most yards from scrimmage in a single season (he finished the year with 1,414 total yards). The Jaguars also signed Carlos Hyde in the offseason to be in the backfield rotation, so the Etienne pick was at least somewhat surprising.

There is probably also a little bit of worry from Jaguars fans because the past regime for Jacksonville spent a high draft pick on Leonard Fournette out of LSU in 2017 (No. 4 overall). While Fournette had his moments, he struggled with consistency, durability and maturity throughout his time in Jacksonville, and his play never warranted that high of a selection. Robinson’s presence eventually got Fournette waived by the Jaguars. Of course, Fournette is now doing just fine after helping the Tampa Bay Buccaneers win a Super Bowl.

With all of that said, Etienne certainly seems like a special player who can be a “slash” play-maker in both the running game and passing game. While the pick was surprising for the Jaguars at No. 25 overall -- since running back was one of the very few areas of strength already on the roster -- Etienne can bring immediate excitement and “home run” ability every time he touches the ball. In fact, prior to the draft, Big Cat Country noted the Jaguars could be looking to add Etienne or another running back somewhat early on in the process.

Kantor: The criticism increased after Coach Meyer said Etienne would be used as a “third-down back,” but he also said “we could be in two-backs and Travis is a guy that goes out…He’s as good outside as a receiver as he is as a running back.” Given this hybrid role, does it change the calculation for the Jaguars? Do you think he could become a major threat in the passing game as a rookie? Finally, does his role in year one really matter given that the Jaguars are likely at least another year away from playoff contention and he could be a long-term part of the franchise?

O’Bleness: I feel like the Jaguars wouldn’t use the No. 25 overall pick on Etienne if Urban Meyer’s vision for him was strictly to be a “third-down back,” at least I would hope not. I think Robinson will still handle a lot of the early-down work in single-back sets, but I could definitely see Meyer and offensive coordinator Darrell Bevell using packages to get both players on the field at the same time. Maybe that means two-running back sets or lining Etienne out in the slot with Robinson in the backfield, or other creative formations.

I don’t necessarily know how big of an impact Etienne will make as a rookie, but I think the coaching staff will scheme ways to get the ball in hands probably 10 or 15 times per game combined between rushing attempts and receptions. I agree the Jaguars are probably still one more year away from being true contenders, but hopefully Etienne is able to find a role, develop throughout the year, and eventually become a big part of the offense.

Kantor: Despite James Robinson rushing for 1,070 yards last season, the Jaguars ranked 29th in the NFL with just 95 rushing yards per game. How do you diagnose the issue? Is it O-line play, running back play, a lack of passing threat? What ills the Jacksonville rushing attack? Do you expect it to improve in 2021?

O’Bleness: The main reason for that is simple: the Jaguars were constantly playing from behind during the 2020 season and had to usually abandon the run game early on throughout the game. If you look at the numbers, Jacksonville averaged 4.5 yards per carry as a team, which ranked 12th in the NFL. The issue was, the Jags only ran the ball 337 times in 2020, the fewest attempts for any team in the league.

Obviously, Robinson had a good season, and the run-blocking from the offensive line was solid, too. The Jaguars ranked 11th in Adjusted Line Yards, and seventh in Power Success Rate, according to Football Outsiders. So, Jacksonville was fairly effective when it ran the ball, but there just weren’t a lot of opportunities to showcase the ground game. With Meyer now at the helm, and the Jaguars hopefully able to put more points on the scoreboard with Trevor Lawrence at quarterback, expect the team to use the run game more often, and to its advantage, in 2021.

Kantor: Etienne and Lawrence are exciting players joining a franchise that hasn’t had much reason for excitement in a while. What are fans’ expectations for each player in year one? Do you think the duo could become cornerstones of the franchise within the next few years or is that asking too much?

O’Bleness: I do think both players will eventually become cornerstone pieces for the franchise. Obviously, expectations are a little higher and more immediate for Lawrence as the new franchise quarterback. For better or worse, Lawrence is looked at as the “savior” and as a “generational talent,” by not only a lot of fans, but also by many folks in the media. Whether those expectations are fair or not, Lawrence obviously has all the tools to eventually lead Jacksonville to its first-ever Super Bowl appearance. I think everybody understands that he will have some growing pains as a rookie and the team isn’t automatically going to be a contender with him under center -- but the expectation is that the team will be much improved, and that Lawrence could eventually be a league MVP and lead Jacksonville to division titles and championships.

For Etienne, as we mentioned, he might not have an immediate impact as a rookie, at least early on. However, he will eventually be a play-maker for the team, and his versatility is going to be important for the Jaguars. Maybe he eventually becomes the lead back, or maybe he and Robinson form a dynamic duo for years to come. He will likely line up all over the field and get the ball in his hands one way or another. I think Etienne will have a few highlight plays with his excellent speed and pass-catching ability, make the most of touches, and learn throughout the year. Ultimately, I expect him to take on a larger role as he gets more comfortable in the offense.