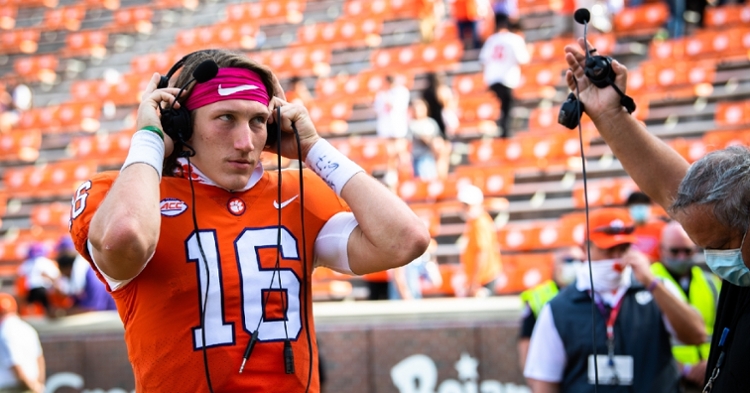 Lawrence is just a few weeks away from officially starting his pro career (ACC photo).

The NFL draft begins on April 29th and the Jacksonville Jaguars hold the top pick. They’re widely expected to use it on Clemson quarterback Trevor Lawrence. As such, we reached out to Ryan O’Bleness from BigCatCountry.com to give us some background on the Jaguars and how Lawrence fits in.

Kantor: There are a few mock drafts that have Zach Wilson going No. 1 to Jacksonville. Is there actually serious consideration of passing on Trevor Lawrence with the top pick? Are these suggestions that Wilson could go first merely clickbait?

O’Bleness: I suppose there is always a chance of something ridiculous happening, especially when it comes to an organization as futile as the Jacksonville Jaguars have been the past several years, but I would say the chances of anybody other than Trevor Lawrence being selected first overall are much less than one percent. The Jaguars have brought in a new regime with head coach Urban Meyer, and he didn’t come out of retirement to coach Zach Wilson or any quarterback not named Trevor Lawrence.

While he didn’t outright say it, Meyer basically confirmed that the Jaguars are going to take Lawrence No. 1 overall in a recent interview with Peter King of Football Morning In America:

Meyer did not attend Zach Wilson’s pro day at BYU, nor did he attend the pro day of North Dakota State quarterback Trey Lance. That should be telling of Jacksonville’s plans with the first pick. He was reportedly present for Ohio State’s pro day with Justin Fields, but obviously Meyer has a lot of ties with OSU, as the former head coach of the Buckeyes.

So, yeah, anybody who thinks Lawrence isn’t going No. 1 overall simply isn’t paying attention, or is just looking to cause a stir. If for some reason it doesn’t happen, which again, the odds of that are incredibly miniscule, there may be an uprising with Jaguars fans. But Lawrence to the Jaguars is as close to a lock as you could possibly have.

Kantor: It seemed that Trevor Lawrence was headed to the Jets before they inexplicably won two meaningless games and handed the top pick to Jacksonville. What was that weird finish like for Jaguars fans? Do you feel that the top three projected QBs (Lawrence, Wilson, and Fields) are relatively close or is there a significant gap between them?

O’Bleness: The 2020 season for the Jaguars was an incredibly difficult one, with the team going 1-15 and losing 15 games in a row after winning the season opener. It was hard to watch at times for Jaguars fans, but in retrospect, it is a small price to pay to get a generational talent like Lawrence. As for the Jets, it did seem inevitable for a long time that Lawrence was headed to New York because that team was clearly lacking the talent needed to win a game in the NFL. But, then, somehow, the Jets beat the Los Angeles Rams, which catapulted the Jaguars into the top spot in the draft order due to strength of schedule. Then the Jets defeated the Cleveland Browns the following week, while the Jaguars lost again, and all of a sudden Jacksonville locked up the No. 1 overall selection. That whole saga was incredibly exhilarating for Jaguars fans, in an otherwise miserable season.

As for your second question, I believe there is a wide gap between Lawrence and the rest of the quarterback class: Wilson, Fields, Lance and Alabama’s Mac Jones. I think Lawrence is a transcendent talent, one that only comes around once in an era. Is he a perfect prospect? No, nobody is. However, Lawrence is probably the most polished prospect since Andrew Luck, or maybe even Peyton Manning. To me, and I believe most people would agree, Lawrence is on a whole different wavelength compared to the rest of the class.

Wilson has gotten a lot of hype lately, especially after his impressive pro day, but I am not sold on him. I actually think Fields will have a better professional career than Wilson. As for Lance and Jones, I simply don’t believe either of those two are ready to make an immediate impact for an NFL team like Lawrence will do as a rookie.

Kantor: Lawrence is coming from Clemson’s pass-first spread offense which used a lot of RPO (run-pass option). He is great throwing on the run and making plays with his legs when needed. What type of offense will he join in Jacksonville?

O’Bleness: With Meyer taking over as a head coach, and new offensive coordinator Darrell Bevell now in charge of the play-calling, it is still a bit of a mystery what exactly the offense will look like, but I have some ideas. I actually did a deep dive on Bevell’s play-calling tendencies in 2020 as offensive coordinator and interim head coach of the Detroit Lions. While I don’t expect it to be an apples-to-apples comparison from last year to this coming season, I found that Bevell heavily favored 11 personnel (one running back, one tight end and three wide receivers), which is a pretty common trend in today’s NFL. The 11-personnel groupings will give Lawrence, assuming he is the pick, plenty of options to throw to with many weapons on the field at the same time. Bevell called passing plays 63 percent of the time, while running the ball 37 percent of the time last season, and called plays out of the shotgun at a 60 percent clip. So, Lawrence should have plenty of opportunities to show off his arm strength if that trend continues.

I do expect Bevell and Meyer to use Lawrence’s mobility and athleticism with run-pass option and zone read/read option plays as well. Last year in Detroit, Bevell didn’t call many RPOs, as Detroit registered just 28 passing attempts on those play types. But when you have a gunslinger like Matthew Stafford as your quarterback, then there isn’t a lot of reason to call a ton of RPOs, as that isn’t really Stafford’s game. However, when Bevell was the offensive coordinator for the Seattle Seahawks, he and Russell Wilson helped revolutionize those zone read concepts in the NFL, as that was more common in college football at the time. I think Bevell will utilize that again, at least somewhat, with Lawrence in the fold.

So, it will be fun to watch how Bevell carries out Meyer’s vision of the offense. For now, it’s hard to say exactly what we’ll see, but I do believe we’ll see many of the elements described above.

Kantor: Although Clemson’s offensive line struggled in run blocking last year, Lawrence has enjoyed three seasons of solid pass blocking. That’s such a huge part of young QB’s success in the NFL. What is the current state of Jacksonville’s offensive line?

The Jaguars were better in run-blocking than in pass protection, but some of the sacks given up last year were due to quarterback Gardner Minshew (and others) holding onto the ball for too long. According to Football Outsiders, the Jaguars ranked 11th in Adjusted Line Yards (which basically assigns a value to the impact the offensive line had on a given play based on the number of yards gained, and then is adjusted based on down, distance, situation and opponent). The team also ranked seventh in Power Success rate. Both of those metrics are good, however, Jacksonville ranked just 25th in Adjusted Sack Rate, so that area needs work, but again, not all the sacks were on the offensive line last season.

Of course, the Jaguars have many picks in the 2021 NFL Draft, including two first-round selections and two second-round selections. The Jags could always opt to draft an offensive lineman early who could compete for a starting spot immediately, but I expect it to be the same or similar to the 2020 starting group.

Kantor: The Jaguars are about to get a bunch of fans from South Carolina (and Clemson alumni from all over). What do you want new fans to know about where the team is now and what expectations should be for Lawrence and the Jaguars in 2021?

O’Bleness: Assuming nothing crazy happens, and Lawrence comes to Jacksonville as planned, the future is (finally) bright in Duval. Jaguars fans, outside of 2017, have been suffering for a long, long time. Meyer is a proven winner at the college level, and if he can bring that same level of success to the NFL and turn Jacksonville from a laughingstock to a perennial playoff contender as expected, there is plenty of reason for optimism.

As for the 2021 season, with the now 17-game schedule in the NFL, I would expect a significant improvement from the 1-15 mark in 2020, but I am still not sure the Jaguars will earn a playoff spot. My thinking is somewhere around 8-9 or 9-8, close to a .500 record. Heading into 2022 and beyond, I expect the Jaguars to be competing for AFC South divisional titles or better.

Thank you to Ryan O’Bleness for sharing the inside scoop on the Jaguars with us. You can follow him on Twitter at @RyanOBleness and me at @Ryan_Kantor.