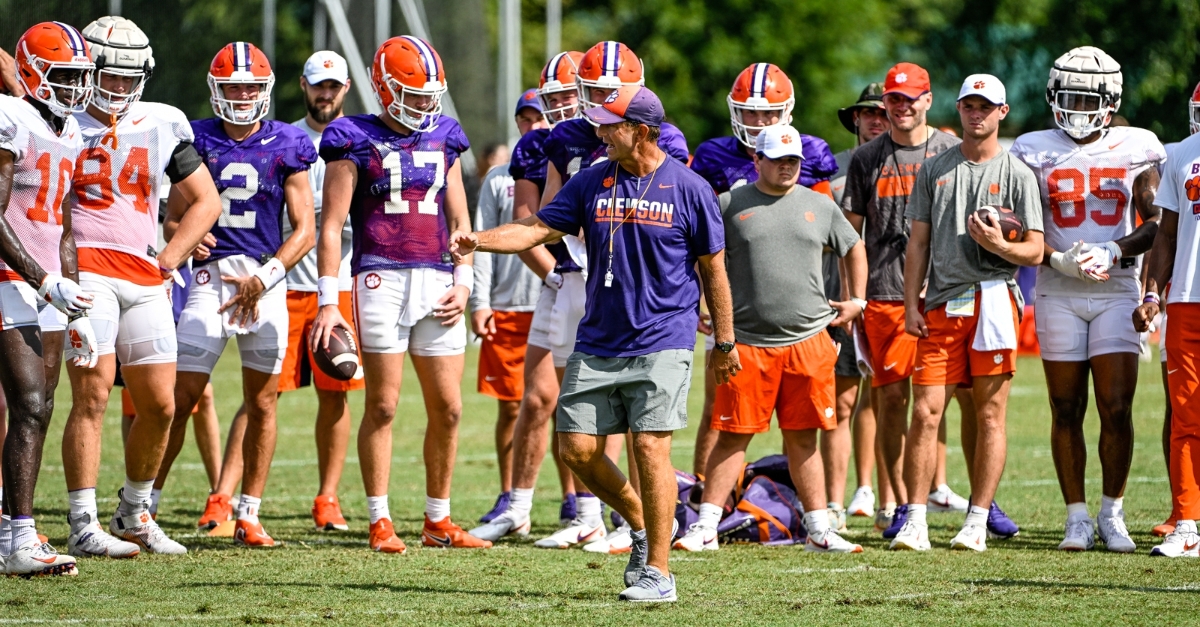 CLEMSON – The heat was on in Jervey Meadows Friday.

Graduation traffic snarled the parking around McWhorter Stadium and Jervey Meadows Monday morning, and there was plenty of snarling going on at the Tigers’ practice as a muggy heat descended on the wet practice fields. The move to Jervey is supposed to simulate a tough road environment (and usually are the first real tough days of camp), and as the sun peeked out behind the clouds and began to beat down on players and coaches alike, everyone started to feel the heat.

It started with stretching – strength and conditioning coach Joey Batson didn’t like the way the Tiger Jacks (jumping jacks) were performed, so he made them do it again.

Defensive tackles coach Nick Eason wasn’t going to miss out on the fun. He made his players do drills over and over again, and even though he’s personable and affable off the field, he flips a switch between the lines (love to see it). As one observer told me, Eason lit into the players Thursday and, “it made me feel bad about myself.”

The receivers and quarterbacks were practicing routes and head coach Dabo Swinney stopped at one point – angry at wide receiver Dacari Collins for the way Collins ran a rub route – and gathered the offense around to deliver a rather loud and pointed message about execution, even when it’s hot and you’re tired.

And that was all in just the first six periods. Some other notes:

*Wide receivers EJ Williams and Adam Randall were in yellow and working to the side. Wide receiver Beaux Collins wasn’t dressed. Swinney said earlier this week – without naming names – that one wide receiver had a hematoma on his lower back and one was battling a shoulder injury. Judging from what we saw, it was Williams with the hematoma and Collins with the shoulder. Swinney did say he expected both back before the opener.

*Offensive lineman John Williams limped off early and had ice on his left knee.

*Cole Turner was in the punt return drills to go with Troy Stellato, Will Taylor, Drew Swinney, Antonio Williams, and Will Shipley. Stellato looks healthy and I can see a scenario where he is one of the main return guys.

*Scouts from the Denver Broncos, Miami Dolphins, and Seattle Seahawks were in attendance, and they were all watching the defensive line.

*It’s fun to watch tight ends coach Kyle Richardson in practice. He’s animated, like most coaches, but he’s always teaching. During drills, he would play the part of a defensive player. We’ve heard that Richardson and Streeter are putting an emphasis on post-snap reads, so Richardson would wait until the start of a route to shade inside, or outside, or move up to press, or sit back, or even simulate a blitz, and make the quarterback and tight end make the same read. And he doesn’t want them overthinking it, either. As he told one tight end, “You can’t get any more open.” In other words, get open and look for the ball.

*The punters were bad the first day, but Swinney has bragged on them the last few practices. They practiced a lot of rugby-style punts Friday, and those were a mixed bag. One hit an offensive lineman in the back of the helmet. The regular punts were hit or miss, as well, and I thought Aidan Swanson had the best punt of the day.