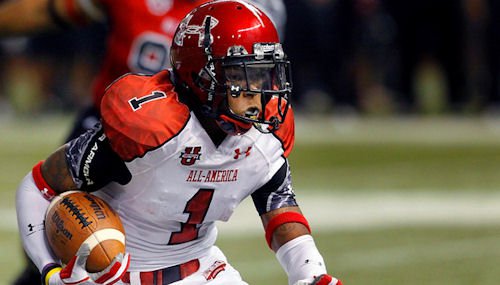 Mike Bellamy is too talented to let him sit on the bench. (Photos: Icon/SMI)

Clemson head coach Dabo Swinney said during spring practice that as many as 12 or 13 freshmen could see significant playing time this fall, and between the highly-touted members of the recent recruiting class and the numbers of quality players that Swinney and staff redshirted last season, that number could go even higher.

However, which five freshmen could be poised to make an impact? TigerNet takes a look at five that could make their mark this season.

View Full Profile – Watkins is another highly-regarded player out of the state of Florida, and he has both Marquan Jones

View Full Profile ahead of him on the depth chart in the slot, or two, receiver position in the Clemson offense.

However, Watkins combines both size and speed and used both to haul in 54 passes for 1,268 yards and 12 touchdowns as a high school senior last season. Watkins will push for playing time – and even a starting position – from day one of fall camp.

The all-purpose yardage leader in the nation last season was Damaris Johnson of Tulsa, and he occupied the slot position under Morris, so look for Watkins to play early and often.

View Full Profile is going to respond after off-season surgery to correct a toe injury suffered at Boston College in late October. The hope and belief are that he will be at or near 100 percent once early September rolls around. If Ellington is healthy, as expected, Bellamy [a speedster out of Florida] can ease into the offense and battle redshirt freshmen Demont Buice

If Ellington isn’t healthy or has a recurrence of his injury, Bellamy could be called on for an even bigger role. But let’s assume Ellington is healthy and will get the majority of carries in offensive coordinator Chad Morris’ offense…..Bellamy could spell Ellington in the backfield, line up in the slot on certain plays, return kicks and punts and generally be a threat all over the field. Bellamy set all kinds of records in Florida, and has promised to do the same at Clemson, but how quickly he gets on the field will be determined by how quickly he picks up the offense and the protections.

He is too talented to let him sit on the bench, so look for Morris to find creative ways to get the freshman involved early in the season while he picks up the offense, similar to what Auburn offensive coordinator Gus Malzahn did with Onterio McCalebb last season.

Crawford arrived on campus in January, and made an impression during spring practice and during the spring game with his athleticism and speed. He even picked up a fumble and rumbled 80-plus yards for a touchdown in one of the spring scrimmages.

During his senior season at Carver High School in Columbus, Ga., Crawford was named Defensive Player of the Year by the Atlanta Journal Constitution and the Columbus Ledger after totaling 87 tackles, 16 sacks, two recovered fumbles, two interceptions and two returns for touchdowns.

View Full Profile on the preseason depth chart, and he figures to get plenty of snaps this fall.

View Full Profile – Many might be surprised by Lakip’s inclusion on this list, but after walk-on kicker Chandler Catanzaro

View Full Profile struggled at crucial times last season, you have to figure that the Clemson coaches didn’t give Lakip a scholarship to come in and sit this fall.

He will be given every opportunity to come in and compete for the starting job, and he has said repeatedly that he expects to be the starter this season. Lakip told TigerNet a few weeks ago that he considers clutch kicks to be “just regular kicks” and says the pressure doesn’t faze him. He proved that when he booted a game-winner in the Georgia state playoffs last season.

Lakip said he is comfortable with kicks up to 55 yards, and if he can show that kind of distance and couple that with consistency on the shorter kicks, he could be seeing a lot of action in Morris’ offense in September.

View Full Profile – Ok, so we are giving you six here, but trying to decide which of these young linebackers will have the most impact this fall is impossible at this point.

Anthony plays on the outside, or the WILL position, and follows Tig Willard on the depth chart. However, the Anson, N.C. native is strong and fast and has unbelievable cover skills. He had 20 interceptions during his high school career, an almost unheard of number for a linebacker, and he will challenge Willard from day one.

Steward plays the middle or MIKE linebacker position, which is currently manned by junior Corico Hawkins

View Full Profile . Steward is also coming off knee surgery, so it remains to be seen how healthy he will be when fall camp starts in a few weeks. One thing we do know, however, is that when Steward is healthy, he is a beast. He has that mean, aggressive, hard-hitting linebacker mentality that the Tigers have been needing, and if healthy, he will log plenty of snaps this season.