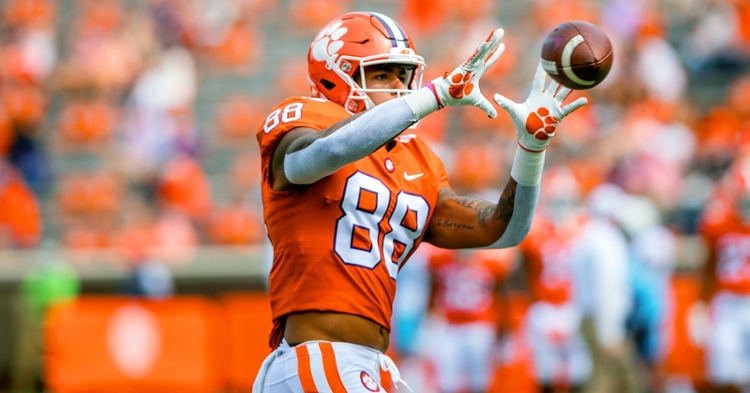 CLEMSON – Tony Elliott believes the Clemson tight ends have a chance to be special as receivers. But he also believes they need to learn to fall in love with blocking in the running game if they want to be complete players.

“It’s been fun for me personally, because I get back closer to the position that I played,” Elliott said last week. “There’s a ton of receiver aspects to the position. There are multiple guys — they have to do a ton of things. There’s a lot of carryover from the running backs room from a protection standpoint, but it’s fun to get in there and dive in and get back to my roots. I think the guys have really, really taken hold to that. I think they’re still trying to figure me out as a person because my style is different than some other coaches that they may have been around in the past. I’m trying to figure them out because it’s a different temperament than being in that running backs room. The tight ends, they’re a little more straightforward, about their business.”

Elliott said that he has watched Spiller win over his running backs.

“C.J. did a great job with those guys, and obviously, it’s not easy coming in,” said Elliott. “For me, it was a little bit bittersweet transitioning because I recruited all those guys and I’ve been through several cycles where I recruited a young man, coached him for four years, watch him graduate and move on. But he stepped in and didn’t miss a beat — those guys have really gravitated towards his personality, his coaching style. So feel really, really good about the hands that I’ve passed them off to.”

“Braden is a guy that we know is very talented and still has ton of room to grow before he reaches his ceiling,” Elliott said. “The biggest thing for him is just getting him committed to being a complete player. Davis, even before I went to the tight ends, he was one of my favorite football players. Just because of the type of person and player that he is. He is always early to everything. He takes so much pride in his work and he works extremely hard. He is so humble. And I really have seen him start to grow in the receiving aspect. Just the details of being able to talk coverages and the fundamentals of route running and releases and playing in space.”

Ennis enters 2021 after playing 27 snaps over four games as a true freshman before injuries derailed his season.

“I think Sage caught everybody's eyes. I think we all knew that Sage was a guy with a ton of potential but you didn't get to see it because he was in a line,” Elliott said. “What you saw out of him in the spring is that he is a tough young man. He will put his face in the fan. He can run and he can stretch the field, he just has to grow as a receiver.”

Lay enters his third season having caught two passes for 25 yards in 122 career snaps over 16 games. However, Lay had six receptions for 39 yards in the spring game, good enough to tie with Ajou Ajou and Joseph Ngata for the most receptions on the day.

“J-Lay, everybody saw J-Lay in the spring game and he was excited and I was excited for him,” Elliott said. “With him, it's the same thing as Braden, just having to get him to commit to being a complete tight end. He has to understand that if you're 6-6, 260, there are going to be some expectations of what you can do in the run game. Even though that may not be your favorite part of the position, fall in love with that so that you get to do the other things you love to do.”

Briningstool is a true freshman out of Tennessee who was a No. 1-rated tight end nationally in the 2021 recruiting class.

“And then you have Briningstool. I think the sky is the limit for that young man,” Elliott said. “I think we knocked it out of the park with him both on and off the field and he's come in and been about his business. He is a sponge. And one thing I am trying to change in that tight end room - if you've been around me you know I am all about the unit - the standard of the unit and everybody being in that brotherhood and he has really bought into that and is learning how to play the position at a high level. And he's put on weight since he got here.”