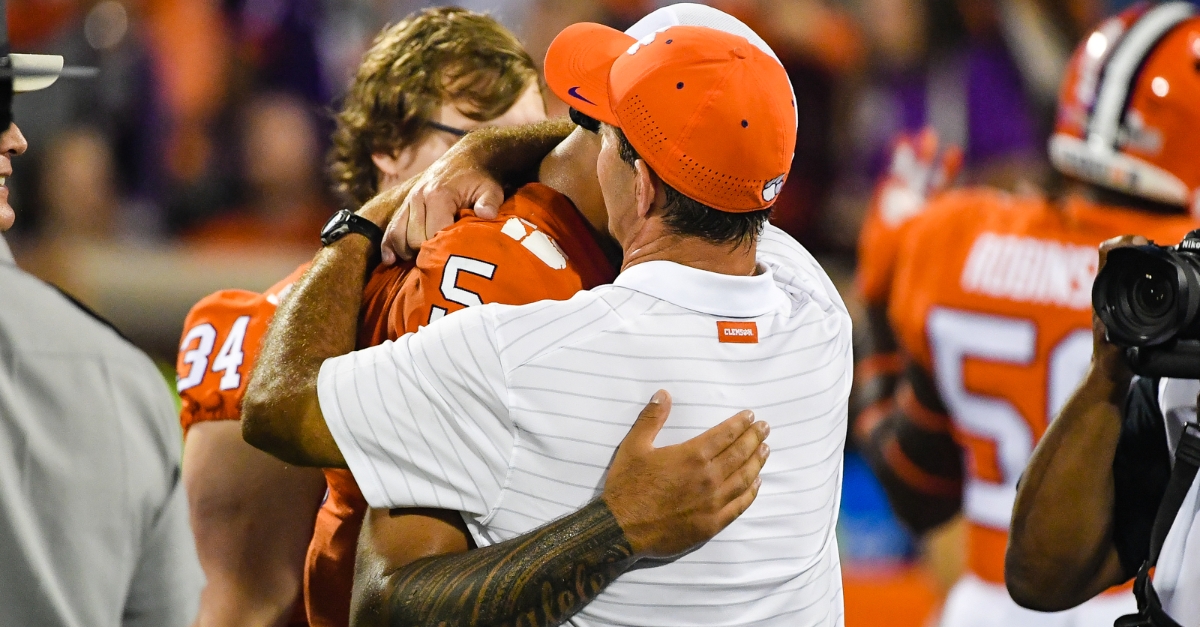 Swinney hugs Uiagalelei after the win over Boston College.

Clemson head coach Dabo Swinney still believes in DJ Uiagalelei, despite a less than stellar start to the season.

Uiagalelei entered the season as a Heisman hopeful but has completed just 54 percent of his passes (76-of-140) for 793 yards, three touchdowns and three interceptions. He is third on the team in rushing, however, carrying the ball 48 times for 160 yards (a 3.3 yards per carry average). His quarterback rating of 106.1 is only 118th nationally.

However, Swinney told the media Monday evening that Uiagalelei had his best game in the victory over Boston College.

“DJ probably had his best game in terms of managing the pocket. He has grown up in the run game and is making his presence known. He is hitting his stride there,” Swinney said. “He's a problem ... a big, strong, man who is hard to bring down. That creates opportunities in the pass game. A lot of it has been fundamental stuff, miscommunication. We really played well upfront. I like how he managed the pocket, so we were pleased with that. He made good decisions and took care of the football. He missed some throws, a couple of touchdown opportunities, and then we had some drops, too."

There have been times when it appears that Uiagalelei could gain big yards if he keeps the ball on a zone-read run call, and Swinney agreed that his quarterback needs to improve in that area.

“There are a couple where he could be more aggressive. That's an area where he is still growing,” Swinney said. “He's had some good scrambles, too. He had a nice scramble the other night on a drop-back. He's getting a better feel for those things. He's making good decisions there."

Cameras caught Uiagalelei returning to the field after midnight Saturday to work on his throws.

"I wasn't surprised to hear that. That's just who he is,” Swinney said. “He is a great competitor, a gym rat. He loves the game. He's frustrated with some of the throws he has missed. That throw he made to (Joseph) Ngata could have put the game away but we just didn't make the play. He's a competitor. He knows the plays he has missed. It's just who he is. He's a young player. He cares. He's not just satisfied with getting a win. He wants to get better. When you have that type of talent and you care and you're willing to work, you're going to improve. It's just a matter of time before it clicks for everyone."

Swinney says that the receivers also have to do their part in helping their quarterback.

"It starts with the run game, first of all. We haven't been able to do a lot in the pass game because we have seen a lot of drop-eight because we haven't run the ball well,” Swinney said. “We did the other night. The biggest thing is to keep working and keep grinding. DJ made some great, great throws on the money. I can think of four right off the top of my head that were easy plays, and we didn't make them. We have to keep going, man. We will continue to work hard in practice. We have an incredible will to win and improve. We are a battle-tested bunch at this point."