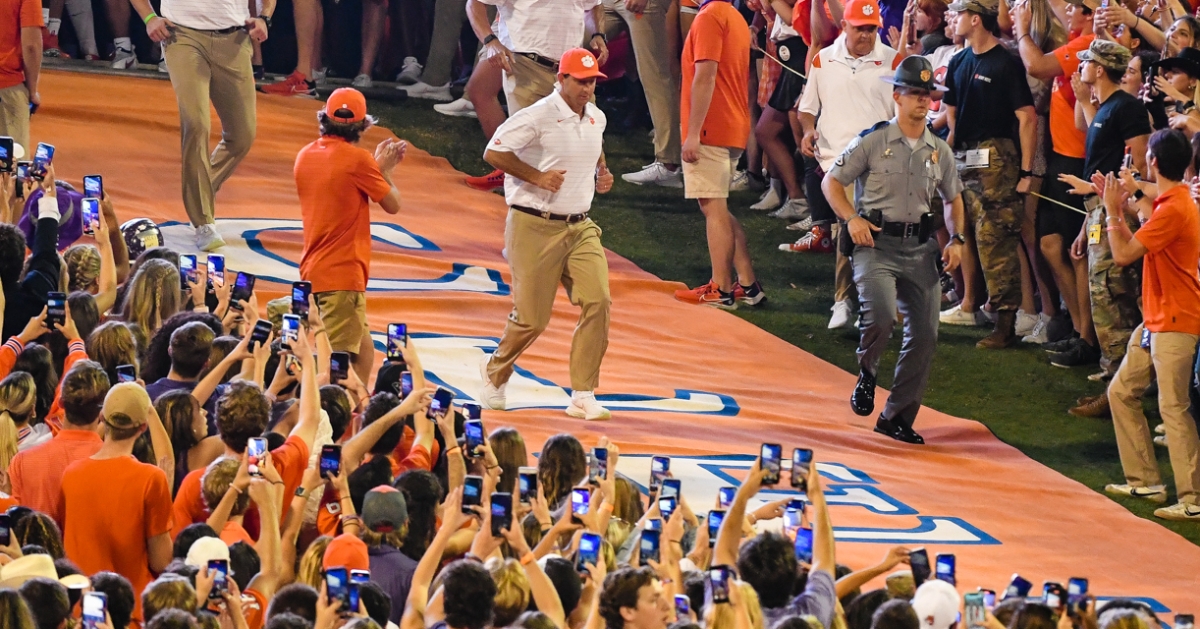 Cooler temperatures and a night game in Death Valley. That’s a recipe for a great day.

Clemson, playing on a normal schedule for the first time this season, hosts Louisiana Tech Saturday night in prime time.

*Saturday's game will be Clemson's second of the season in prime time but its first night game at Death Valley in 2022. Clemson is 41-7 at night since 2015 and 22-4 in night games since 2018. Under newly installed LED lights as part of recent renovations to Memorial Stadium, Clemson will attempt to win its 18th consecutive night game in Death Valley, a streak that dates to the middle of the 2013 season.

*Clemson is coming off a 35-12 win against Furman in Death Valley in the Tigers' home opener. It marked the 35th consecutive game in which the Tigers have walked out of Memorial Stadium victorious, tying the 2006-11 Boise State Broncos for the 14th-longest home winning streak in FBS history. Clemson’s streak is only the 15th home winning streak of 35 games or more in FBS history and is two games shy of the ACC record (Florida State, 37 from 1992-2001).

*Clemson has won eight consecutive games, the longest streak in the Power Five. Clemson has not trailed at any point in its last five games, victories against Wake Forest, South Carolina, Iowa State, Georgia Tech and Furman. Clemson last trailed on Nov. 13 last year until the Tigers turned a 7-3 deficit against UConn into a 10-7 lead on a Will Swinney fake field goal for a first-quarter touchdown in an eventual 44-7 win.

*Clemson and Louisiana Tech met in the Humanitarian Bowl in Boise, Idaho at the end of the 2001 season. The Bulldogs then traveled to Clemson for the Tigers’ 2002 home opener, as the two schools met within a three-game period on Clemson’s schedule. The Tigers earned a 49-24 Humanitarian Bowl win in Woodrow Dantzler’s last game at Clemson in 2001. Despite playing in snowy conditions that featured the second-coldest recorded kickoff temperature in school history (32 degrees), the Tigers threw five touchdown passes in that game, then an all-time Clemson single game record.

Clemson then won the 2002 game at Clemson, 33- 13, behind quarterback Willie Simmons, who later joined Clemson’s staff en route to his current position as head coach at Florida A&M. Clemson won the programs’ most recent meeting, a 51-0 home shutout in 2006. James Davis (143), C.J. Spiller (127) and Demerick Chancellor (113) all reached 100 rushing yards in the game, the fourth such occurrence in Clemson history.

Check out the fourth edition of David Hood's TigerNet Podcast at this link or find it on Spotify or Apple Podcasts.

WHEN LOUISIANA TECH HAS THE BALL

It’s likely that Clemson will be without three of its top defensive linemen Saturday. Tyler Davis (groin), Bryan Bresee (away with family this week), and Xavier Thomas (foot) all might be out for this game. The good news is that there are plenty of players ready to step into a bigger role. That includes players like Ruke Orhorhoro, Tré Williams, Payton Page, DeMonte Capehart and Etinosa Reuben.

The Tigers have been susceptible to the screen so far this year, and with Bulldog head coach Sonny Cumbie and his Air Raid attack, you’re liable to see more of the same. But if I’m Cumbie, I might fake a few and go over the top and see if I can catch the Tigers over-committing to the screen.

The Bulldogs have played two quarterbacks this season and both have similar stats – Parker McNeil and Matthew Downing – but freshman Marquis Crosby (23 carries for 220 yards, a 9.57 yards per carry average) is the workhorse at running back. Senior tight end Griffin Herbert is averaging 39 yards per reception (4-156), while sophomore receiver Tre Harris leads the team with 10 receptions (for 109 yards). Clemson’s corners will have to play better – and with more discipline – than they did last week.

Here’s the thing that’s concerning about the Clemson offense – since the start of last season, the Tigers have played 15 games. In 11 of those games, the offense has failed to crack the 400-yard mark of total offense. Two of the four games in which they’ve cracked that mark are against UConn and South Carolina State. The offense is currently on a streak of four consecutive games under 400 yards. At some point, it’s no longer a concerning trend and it’s simply an identity. Are the Tigers getting close to that point? Maybe.

The Louisiana Tech defense is ranked 106th nationally, and they give up nearly six yards per play. Clemson can’t hold anything back, can’t go vanilla any longer. It’s time to see if there is more in the tank than they’ve been giving. They need big games from Joseph Ngata, from one of the running backs, and from quarterback DJ Uiagalelei. But we really need to see this offensive line impose its will for four quarters. The Tigers are better across the board than the Bulldogs, and have an advantage. But can they take advantage of it? It’s time for four quarters of dominant football.

The Bulldogs are average at punter, have hit 2-of-3 field goals, and Buck Buchanan has hit six of his 11 kickoffs into the endzone. Smoke Harris is dangerous in the punt return game (5-for-60), and they have a couple of freshmen wide receivers returning kickoffs who show promise. Clemson’s BT Potter is 11-for-11 on kickoffs/touchbacks, while freshman Robert Gunn is 3-3. Potter has made both of his field goals and Aidan Swanson is averaging a little over 40 yards per punt.

If Clemson’s offense has to grind out drives – like they have over the last four games – this will look a lot like last week. Short throws from the opposition, throws to the tight end, and the offense having to put long drives together due to a lack of big plays. In fact, Clemson has just one play over 40 yards this season. The hope is that they put it all together and play better than they have since the Wake game last year. But is this offense more than a trend? Here is the kicker for me - since the start of the 2020 season, Clemson is 1-7 against the spread in September. Clemson has failed to cover its last six games in which it was favored by 30 or more (ATS stats per ESPN Stats and Info).