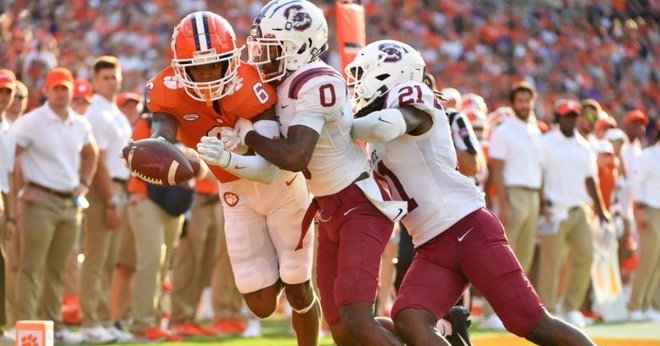 EJ Williams had over 400 receiving yards in his time as a Tiger before entering the transfer portal.

"I would like to thank Coach Swinney and the Clemson staff for investing their time and trust in me over the past 3 years," Williams said. "To my teammates I thank you guys for pushing me everyday and being the best group of brothers I could ask for. I will always love you guys and never forget you all. After a lot of processing and evaluating I know it is evaluating I know it is best for me to enter my name in the transfer portal."

Williams played in all 13 games, logging seven catches for 70 yards this season.

Personal: Born Nov. 14, 2001 … enrolled at Clemson in January 2020 … sports communication major … played at same high school as former Clemson players Justyn Ross and Ray Thornton III … his sister, Kahlia Lawrence, was a 2018 draft pick by the WNBA’s Minnesota Lynx … wore No. 39 on Military Appreciation Day in 2020 to honor his father, Sgt. 1st Class Eddie Williams, Sr., who passed away at age 39 in 2010 after 18 years of service in the U.S. Army.