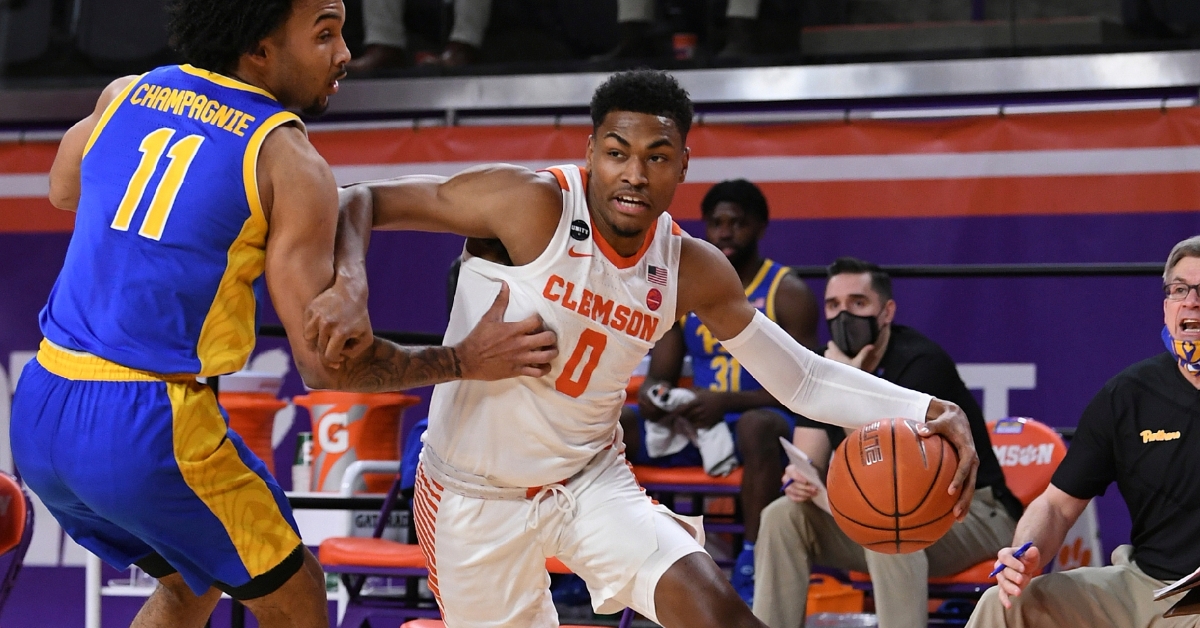 Clemson can build on its resume this week in Greensboro. (ACC photo)

Clemson men's basketball is set to return to the NCAA Tournament for the first time since 2018 and the third time under Brad Brownell. Where exactly they land is a point of contention among bracketologists, however.

The Tigers (16-6) can add to their resume in this week's ACC Tournament in Greensboro, starting on Wednesday at 2:30 p.m. (against the winner between 12-seed Pitt and 13-seed Miami on Tuesday). With the NCAA Tournament entirely in Indianapolis this year, the only suspense will be where they are seeded and the bracket around them on the upcoming Selection Sunday (6 p.m./CBS).

Two of the more notable bracketologists have disagreed quite a bit on Clemson down the stretch. CBS Sports' Jerry Palm picks Brownell's group for a 5-seed currently, meeting projected Big West champ UC-Santa Barbara and in a bracket pod with 4-seed Kansas for a potential rematch of their 2018 meeting. ESPN's Joe Lunardi had the Tigers as low as an 8-seed going into the weekend but has them as a 7-seed now, potentially in a rematch with Maryland in a pod with projected AAC champ Houston.

The average of bracket projections splits the two for a 6-seed pick for Clemson.

The Tigers continue to have solid marks in metrics, with a near top-50 non-conference strength of schedule now (54) and a top-30 overall schedule (28). Clemson did most of its damage at home, with 11 of its 16 wins, but they also grabbed three at wins at neutral sites (two over top-20 NET teams) and two on the road. One of the more impressive marks the Tigers carry into the week also is no losses to NET Quadrants 2-4, which will be tested again on Wednesday against the Hurricanes or Panthers.