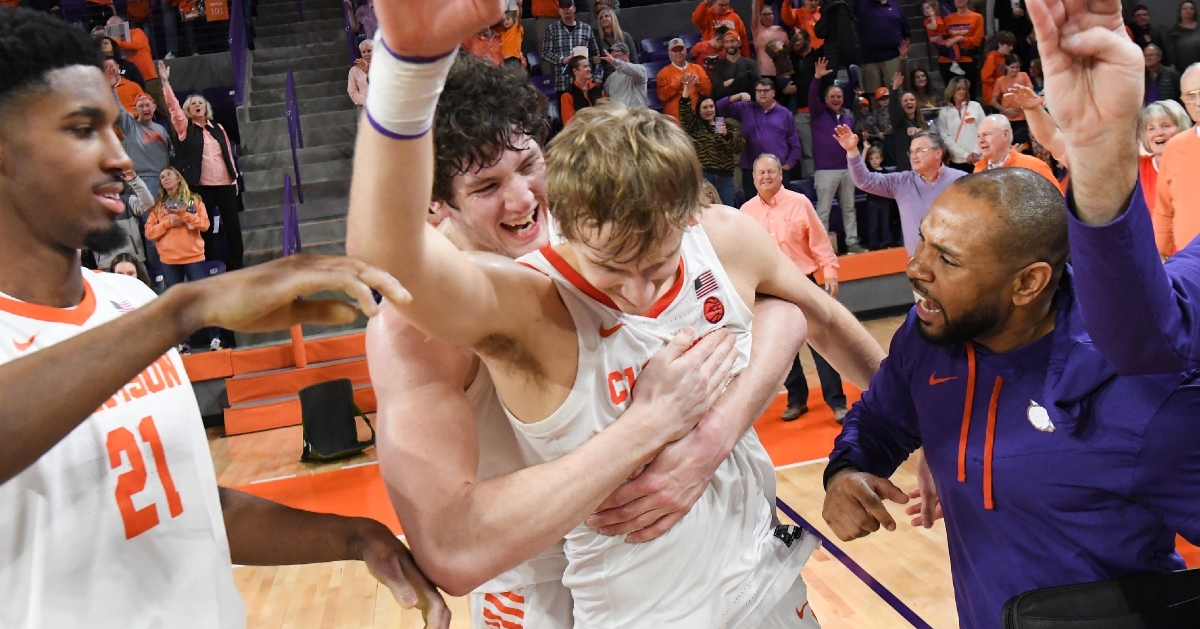 There was no way Hunter Tyson was going to be outdone by his little brother. Especially not with a critical ACC game on the line.

With Clemson trailing Virginia Tech 50-48 and just 14 seconds remaining on the game clock, head coach Brad Brownell called a timeout to set up a final and hopefully successful play. In that situation, why not call the number of your best player?

Coming out of the timeout, Tyson slipped off a screen, pumped once in a shot fake to throw off the defender and then calmly drilled a game-winning three-pointer from the top of the key to lead the Tigers to a 51-50 victory over the Hokies. Tyson even secured the win when he grabbed a rebound with a second remaining to thwart any final Hokie hopes.

Brownell told the media after the game that Tyson had options, but he felt like his senior was going to be the one to make the big play.

"He is one of our best players and he has been in it. I just felt like he was going to make a play today," Brownell said about Tyson's game-winning shot. "He had the option. He could shoot the three. He could drive. He could throw it to PJ. He could do different things. But I told him, 'If you are open, shoot it.'"

Tyson’s 3-pointer was only the third three-pointer of the evening for the Tigers and the only one of second half.

“I was pretty relaxed. I took a couple of deep breaths when I was walking out there,” Tyson said of his big shot. “Just wanted to trust my work. I was really blessed. God blessed me to be in that moment and I was able to capitalize. I kind of peeked back to see where he was after the screen, and I saw there was a little bit of separation, but he was sprinting really hard. So, I knew if I shot-faked he would definitely jump. I had plenty of time.

“It means a lot. It really does (Brownell having trust in him). I have been here awhile and for him to trust me in that moment really means a lot. Walking out there I just tried to take a few deep breaths and treat it like any other shot. I've shot thousands upon thousands of those shots. It's just a big moment and I was able to capitalize.”

Tyson had a little extra motivation for the game-winner. His younger brother, Cade Tyson, is a freshman at Belmont. Back on November 7th, in his collegiate debut, Caleb came off a screen and calmly nailed a 3-pointer (from almost the same spot as Hunter) as time ran out in leading Belmont to a 70-69 win over Ohio. That earned him the No. 1 spot on ESPN SportsCenter’s Plays of the Day.

“He hit a game-winner a little bit similar to that so I didn't want him to one-up me," Tyson said. "But I probably won't be No. 1 on SportsCenter. So, he does have that.”

PJ Hall led the Tigers with a game-high 20 points. The win kept the Tigers atop the ACC standings with an 8-1 conference record, a game ahead of 7-2 Virginia. The Tigers are 16-4 overall and the win was their 14th consecutive inside Littlejohn Coliseum.

Hall said the Tigers have to win their home games.

Brownell credited both Hall and Tyson.

"PJ made a heck of a shot late. Squirreled one in," Brownell said. "I thought he was fantastic all game, just playing with confidence and bringing positive energy to our team.

"Hunter Tyson, the same thing. In every huddle he was challenging our team and each other. We just had good spirit throughout the day. I am just pleased and real happy for him to make a huge shot like that -- that was big time."

Cade Tyson made is collegiate debut for Belmont tonight with 18 points, 4 rebounds and thisgame-winning 3 for #Belmont

Not to be outdone, older brother Hunter Tyson led #Clemson with a 19 point, 13 rebound double-double in the win.pic.twitter.com/DPuNBV6xLK