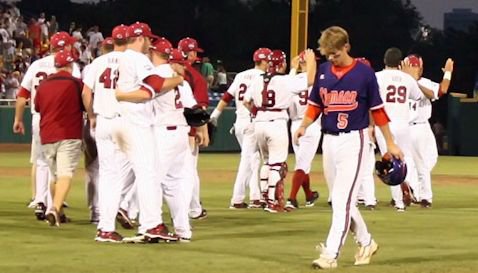 Mike Freeman walks off the field after losing to South Carolina in the 2010 College World Series.

I was there the day the music died and didn’t have a clue what I was witnessing.

No, I’m not talking about the real event that spawned that saying – the tragic plane crash that claimed the life of Buddy Holly. Instead, I’m talking about the game four years ago that started a slide for the Clemson baseball program, a slide that continued this past weekend with a three-game sweep at the hands of Miami, dropping Clemson out of the polls.

I love baseball. It’s the sport I grew up playing, and while there is no doubt that college football has its pull on me, baseball is my first love. For me, the rhythm of the game, the choreographed and familiar movements and the sounds of a game on any level on a warm spring evening are like a symphony. For the Clemson baseball program, that symphony is hitting sour note after sour note.

The summer of 2010 was exciting and riveting – the Tigers lost two of three to Wake Forest near the end of the season, but swept Florida St. in a three-game series at Doug Kingsmore Stadium to win the regular season ACC Atlantic title. The Tigers went 1-2 in the ACC Tournament, and earned a trip to Auburn for the NCAA Regional.

The weather was hot and sticky and the crowds were definitely pro-Auburn, but the Tigers knocked off Southern Miss and then Auburn in the first two games of the regional, with extra-curricular drama surrounding outfielder Kyle Parker

Kyle Parker
Outfielder (2008 - 2010)
#11 6-1, 200
Jacksonville, FL
View Full Profile and his becoming a first round draft pick by the Colorado Rockies. Auburn won game three, but the Tigers held on for a 13-7 win over the other Tigers in winning the regional.

The Tigers hosted the Super Regional against Alabama, lost the first game but won the next two by scores of 19-5 and 8-6. The sight of the Clemson players climbing the outfield wall to celebrate with the fans in the Cajun Café following the Super Regional win – earning a trip to Omaha and the College World Series – will forever be burned in my memory.

In Omaha, the Tigers continued their roll in beating Arizona St. 6-3 in the first game and Oklahoma 6-4 in the second game. The Tigers were on a roll, and needed just one victory to claim a spot in the championship. My son Koty went with me on that trip, and we spent a heady week celebrating victory after victory with the program, giddy at the possibility of a national championship.

It was at that point that it all changed, and things haven’t been the same since that time. The Tigers lost the next two games – both to South Carolina – and went home without the championship. The Gamecocks began a masterful run of their own that began a streak of back-to-back national championships. The Tigers, meanwhile, haven’t won any kind of postseason series since the win over Alabama.

The Tigers hosted a regional in 2011, and despite having a team that won 43 games lost the regional to upstart Connecticut. The Tigers won the first two games of the regional, forcing the Huskies to win two games at Doug Kingsmore. They did just that, the finale a 14-1 pounding that seemed to take some of the heart out of the program.

The 2012 and 2013 seasons ended with losses in the regional at South Carolina, and the frustrations against South Carolina continued this season as the Tigers were swept by their rivals. The stat line there isn’t pretty – the Gamecocks have won 13 of the past 16 games in the series, dating back to the two games in the 2010 CWS. Overall, South Carolina has won 23 of its last 31 games against Clemson.

The numbers against the better competition aren’t much better, and against South Carolina, North Carolina St., Virginia, Miami (FL) and Florida St. this season the Tigers are just 3-12.

Yes, the numbers are ugly. Is it coaching? Is it psychological? Is it talent? I don’t know the reason or reasons, but in preparing to write this it caused a lot of reflection on that 2010 season and the players who made it so memorable.

Richie Shaffer
3rd Base (2010 - 2012)
#8 6-3, 205
Charlotte, NC
View Full Profile (7-36) all put up numbers that were typical of that era, the year before the NCAA changed the bat types. However, those cats could all play, and it’s no coincidence that six of those players were drafted in the professional draft that June.

Overall, 19 players off of that team would get drafted, and Miller and Dominic Leone

Dominic Leone
RH Pitcher (2010 - 2012)
#6 5-11, 195
Norwich, CT
View Full Profile are currently on the roster of the Seattle Mariners. Other players from that team are still in the minor leagues, toiling away.

Yes, that team was full of talent, and I don’t know (and couldn’t tell you for sure) if this young group of players has that kind of potential. Right off the top of my head, though, the answer is no. Daniel Gossett

Matthew Crownover
So. LH Pitcher
#44 5-11, 205
Ringgold, GA
View Full Profile could have played on that 2010 team, and players like Steven Duggar

Since 1991, the Tigers haven't had a class of seniors go their entire careers without trips to the College World Series. This year's senior class, which includes Steve Wilkerson

This year’s team sits at 25-19 (12-11) in the ACC, and the team’s RPI (per www.warrennolan.com) sits at 46th nationally with the 26th-toughest schedule. The Atlantic Division title is all but lost, and if the season ended today the Tigers would escape the play-in game in the ACC Tournament as the sixth seed (behind Miami, Florida St., Virginia, Duke and North Carolina. Two other teams (Wake Forest and Georgia Tech) sit just a half-game behind Clemson in the standings at 12-12.

However, all is not lost. The Tigers have six ACC games remaining, and those six games are against two of the three worst teams in the league – three against Boston College (17-27 overall, 8-16 ACC) and three against Notre Dame (17-26, 4-17). The Tigers can and need to make a late-season push in order to cement their place in the ACC Tournament and to earn an NCAA Tournament berth.

There were plenty of empty seats this past weekend at Doug Kingsmore, and if the Tigers continue their recent slide there will be many more. The notes are indeed sour right now, but the schedule presents a second chance at a quick tune-up before the postseason. Will the baseball program continue to hit a discordant note with its fans, or will a late-season push hit all the right notes? It remains to be seen, but things haven’t been the same since June of 2010 and the score needs to change, starting now.