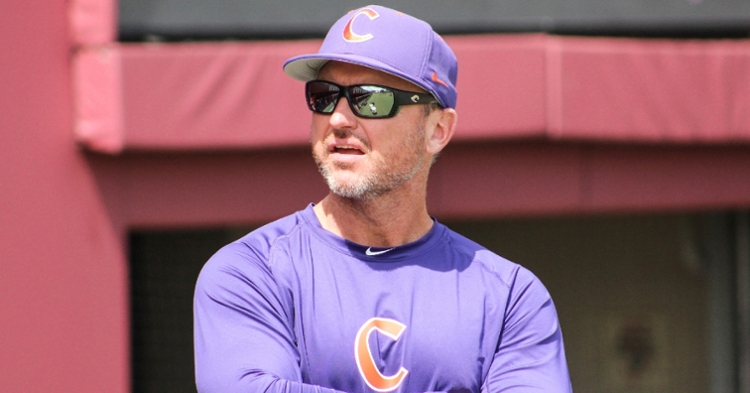 Monte Lee will return next season.

Clemson athletic director Dan Radakovich is hoping he can help baseball coach Monte Lee bounce back from a losing season, and the administration met Friday to see if they can provide financial assistance to the players.

Radakovich said baseball didn’t “hit the mark” he was looking for.

“We had some sports that didn’t hit their mark and baseball was one of those. Monte and I have had several discussions about that and what we can do to help him,” Radakovich said to Sportstalk Media this week. “But we did an analysis of Clemson and Georgia and Georgia Tech and Tennessee and South Carolina, over the last five years the winningest program has been Clemson and the program that has gone to the most NCAA Tournaments has been Clemson. It just hasn’t been this last year. So what do we go to get back to the expectations that Monte has and we have and the fans have for our baseball program. We are looking forward to making whatever adjustments are necessary to do that and get Clemson baseball back to where it should be.”

Each school in Division I is allotted 11.7 scholarships for its team. Because baseball is a designated equivalency sport, coaches are able to divide their scholarships into awards for up to 30 players. Some programs, such as Vanderbilt, use “need-based” endowments to attract the top players. One coach told me earlier this year that, in effect, Vanderbilt can hand out 35 scholarships.

Other schools use the Academic Common Market as a tool. The Academic Common Market is a tuition-savings program for college students in 15 southern regional states, who want to pursue degrees that are not offered by their in-state institutions. Students can enroll in out-of-state institutions that offer their degree program and pay the institution’s in-state tuition rates. (It’s my understanding that Clemson had two baseball players using the ACM this past year).

However, Radakovich said the school is looking at alternatives to help level the playing field.

“We are actually having a meeting tomorrow (Friday) to talk about some alternatives to that. What can we do as an institution and what can we do as an athletic program within NCAA rules? The Academic Common Market, at the end of the day, is just a vehicle to allow in-state tuition for out-of-state student-athletes,” Radakovich said. “So what are some of the alternatives that we can look at that will help get to that bottom line but maybe a different route? We have a great institution as to how it relates to looking at things outside the box and that is one of the things we are going to try and do tomorrow.

Lee told TigerNet a few weeks ago that he thinks his club is close to turning the corner.

“I think our club is close. I think if you look at the pieces that we have, and we will know a little more in about four or five weeks in terms of the draft and how the draft will affect our roster for next year, but we have some really good pieces coming back,” Lee said. “We have a great freshmen group. We have a lot of returners we think will be back that we feel very good about. Even with our senior class, because of the COVID year, they have a year of eligibility left. So, depending on what happens in the draft, some of these guys may come back and go to grad school for another year so I don't think it's out of the realm of possibility that some of the guys that graduated could be back. We will certainly look at it and how the draft goes for them. I think we are very, very close.

“We have the No. 10 recruiting class by some publications coming in. And our 2022 class is going to be a Top 10 class as well. If there was one thing I would tell Tiger fans, we've got back-to-back Top 10 classes coming in and we feel very good about the talent level we have coming in next year and also returning.”