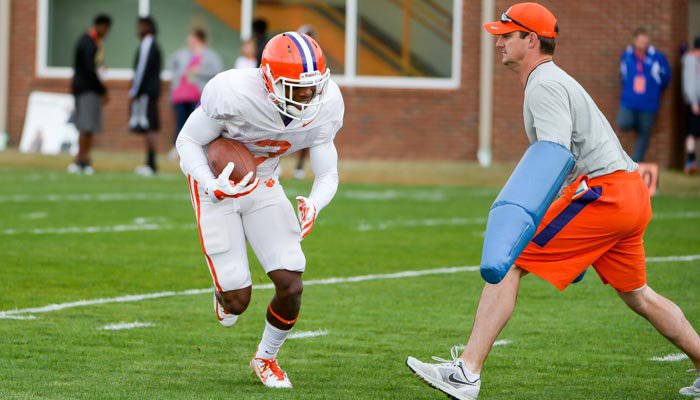 Two years ago Clemson and Tennessee started a battle as both claimed to be "Wide Receiver U." No one could win the official title because there is no trophy in this branding war. The only real winners claimed when prospects chose their school.

A lot of information can be compiled to assist in this debate. Years ago Tennessee did produce NFL talent at the position, but most prospects have never heard of Stanley Morgan and Peerless Price. Recently, Clemson has dominated this category with players like Nuk Hopkins, Sammy Watkins, Jaron Brown, Martavis Bryant and Adam Humphries.

Yesterday the battle heated up once again. Amari Rodgers is a four-star prospect who is considered one of the nation's wide receivers. Rodgers is the son of national title-winning quarterback, Tee Martin. Rodgers lives in Knoxville, TN. Despite the natural draw and the family ties to the UT program, Rodgers committed to Clemson on St. Valentine's Day.

This is a major development. Not only did he spurn Tennessee, Rodgers turned down an opportunity to play for his father who is the offensive coordinator at Southern Cal. Rodgers committed to the Trojans last season, but backed out of that commitment when Clemson offered.

Rodgers is the perfect prospect at the Tigers' "Two" wide out. This is the spot that is currently occupied by Scott and Ray Ray McCloud. This is the jet sweep, screen pass, underneath specialist that excels at turning a short pass into a big play.

This commitment is big for several other reasons. Clemson stole Tennessee commitment Hunter Johnson in the fall. Johnson is the nation's only five-star quarterback in the class of 2017 and is considered one of the top passers in the past few classes.

Last week Tennessee lost its biggest commitment for 2017 when wide receiver Tee Higgins of nearby Oak Ridge, TN decommitted after an unofficial visit to Clemson. Some consider Higgins the nation's top wide receiver prospect in the country.

This past fall the wheels of this trifecta began when Clemson recruiting coordinator and quarterback coach Brandon Streeter stayed after Johnson despite his commitment to the Vols. Streeter convinced Johnson to visit in December and Johnson soon flipped to the Tigers.

Rodgers may have eventually ended up at Clemson as well, but Johnson's commitment didn't hurt. Rodgers spent the fall hearing from Tennessee coaches how Johnson was going to be the star in the Volunteer offense, so when he flipped to Clemson, it had to make the Tigers even more attractive.

Clemson currently leads for rivals.com's number one wide out in the class of 2017, J.J. Robinson of Lakeland, FL. Could Clemson pull off a miracle passing class of Johnson, Rodgers, Robinson, and Higgins? Would that be the highest rated class at quarterback and wide receiver in rivals.com history? Things got a lot more interesting yesterday when Rodgers became the second commitment and key piece to this equation.