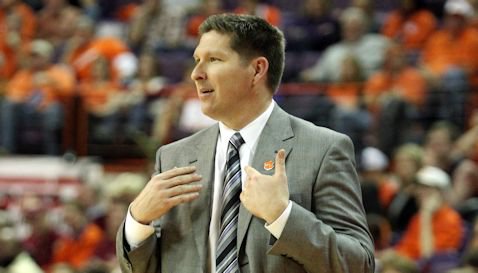 The result was never really in doubt, at least in my mind.  Let’s be clear, Syracuse is better than Clemson in basketball.  That can be said almost every year.  This year, considering Syracuse is number one in the country and undefeated, you could make a strong case that they are better than every team in the nation.

But Clemson did play well for the first 15 minutes of the game.  The Tigers tied things up at 22 and seemed pretty confident, but Syracuse closed the first half with a 9-0 run.  Clemson closed to within five with 10 minutes to go but again the Orange were better than the purple last night.

Clemson's offense was once again the issue.  The Tigers shot just 34% from the field.  Clemson had only 14 field goals the entire game.  Like many games this season, K.J. McDaniels

K.J. McDaniels
Jr. Forward
#32 6-6, 200
Birmingham, AL
View Full Profile played well offensively hitting 19 points while grabbing 10 rebounds.  However, the supporting cast did not have a good night on the offensive end.  McDaniels went 6-13 from the field while the rest of the Tigers went 8-28.  Clemson has to get more than eight field goals from players other than McDaniels.

Syracuse shot the ball well, going 50% from the field.  Also the Orange turned the ball over only five times the entire game.

Two other stats stood out to me.  First, Syracuse outscored Clemson in the paint 32-14.  Also Syracuse scored 16 points off of turnovers while Clemson scored only four points off of Syracuse turnovers.

Syracuse coach Jim Boeheim was complimentary towards Clemson, saying, "They are a good team, a really good team.  We won by more than I thought we would.  We shot the ball well and were fortunate to do that tonight."

Now the Tigers head straight to South Bend, IN where they will face a down Notre Dame squad in their own building.  Notre Dame enters Tuesday night with a 12-12 overall record and 3-8 in the ACC.  The Irish have lost five of their last six and eight of their last 10.

Tuesday night will be Clemson’s first trip South Bend. The Irish are having a hard time in their initial ACC season, so Clemson has a chance to get its seventh conference win of the year and its third win in the difficult part of the schedule I  nicknamed "The Gauntlet."