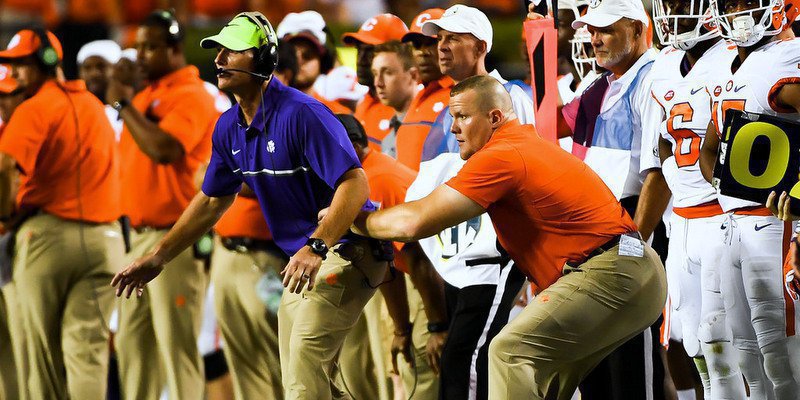 WOW! Being a Clemson Tiger is great! There is so much to dissect from the game. I think one has to start with the defense. It seems like Venables confused Tua and maybe backed off of stopping the run at all cost and switch to stopping the slant routes. The pass rush and red zone defense were outstanding.

Do you think we should in some way thank South Carolina, due to the way they exploited some of our safety coverages over slot receivers and do you think that perhaps helped us prep for this matchup with Alabama’s deep core of WR?

You are right. This is the best time to be a Tiger!

I think the key to stopping Tua was Venables’ plan to disguise coverages and blitzes. Tua is great at pre-snap reads, but he can be confused when you can disguise. He didn’t see the trap coverage on Terrell’s pick six. He was confused on Mullen’s pick on the deep ball. He also didn’t see Mullen on his sack on the corner blitz. Venables was able to show Tua something in a pre-snap read, but the coverage or the blitz was a different look. Tua is great when he is not moved off his mark, and he can be confident in that pre-snap read, but Venables confused him.

I don’t think there was a sense of urgency in the South Carolina game. Clemson’s safeties were confused, but that game was never in doubt. The staff was able to move forward and rebuild confidence. I was told Venables told his secondary that he had total trust in the secondary heading to the Cotton Bowl and they secondary responded with confidence.

So based on the math I've done, 2020 will be the 125th season of Clemson football. I know back in 1995 & 1996, the program did jersey patches for the 100th season and did throwback uniforms for one game in 1995 (for a 100th season) and then against 1996 against Furman (to celebrate the 100th anniversary of the school's 1st football game). Has there been any talk regarding special uniforms to mark the milestone season, especially since Dabo has been pretty set about uniforms the past few years? Any other plans that are in place for the 2020 season to commemorate 125 years of Tiger football?

I didn’t realize it was the 125th year until you pointed it out. Thanks for doing so. I have not heard anything on the uniforms. I do know Dabo doesn’t like messing with the uniforms. However, maybe a patch or a helmet sticker wouldn’t be bad for a game. Thanks for pointing that out.

Hope you are doing well.

If you had to determine what college football team was the greatest of all time, then what criteria would you use? In my opinion, that team would have to be an undefeated National Champ, which eliminates a lot of teams. Second, given the difficulty of comparing teams from different eras, I would think you would have to take a long look at what each team did during their seasons, regarding offensive and defensive statistics, the margin of victory, and how they fared against the best teams on their schedule. Looking at our recent National Champs, and using these criteria, I would think we have to rank at or near the top. Consider the following:

1) 15-0 (first time that has been done in over 100 years, although I readily concede that it was not possible to play that many games until very recently)

2) We beat the next two highest ranked teams going into bowl season, both of whom were undefeated, by 27 and 28 points. Has that ever happened before? Looking back over the BCS and playoff era, it appears only one other team has won their title game by more than 28 points, and that was the 2004 USC team that ended up having to vacate their title. Even the 2001 Miami and 2013 FSU teams who many say were among the best did not win their title games in as dominating a fashion as we did Monday night. Those teams also did not have to play a top 3 team the week before.

3) We had the top-ranked defense in the country. Not sure about the offense, but I believe it was in the top 5 and was one of the most balanced in the country.

4) I believe we won our last ten games by at least 20 points.

For what its worth, I do not think the number of players drafted correlates to the best team of all time because it takes more than talent to be great. For example, the Alabama team we just played may end up having more guys drafted, but we were by far and away the better team. Also, I do not think “the eye test” is a good indicator, given how the so many of the so-called experts picked Alabama to beat us. Maybe people could say our schedule was not as difficult as what some other great teams have faced, but the fact of the matter is that we dominated when we played the other top teams at the end of the season.

What say you? I say the 2018 Clemson Tigers are the best of all time.

I am still keeping you and your family in my prayers!

I think it is hard to compare different teams and different eras. I would say Tommie Frazier’s Nebraska teams, 2001 Miami and 2013 FSU were the best teams I saw before this Clemson team.

I have a couple of questions. What did Nick Saban mean by “copycat plays” that Clemson was running? Was he referring to the offense or defense, or both? Did he mean plays like the shovel pass that we stopped and the one Etienne scored on?

Also, While Tavien Feaster had a couple of huge possessions for us in the NCG, yet his season was rather lack-luster given expectations. Choice finished his career as a Tiger. We have Lyn-J, Mellusi and possible Ealy coming in… do Feaster’s comments about transfer possibilities seem more of a reality now?

Finally, why would an OL recruit turn down a Clemson offer?

Thanks and Happy New Year to the 2018 National Champs!

I think he meant plays that others ran against Alabama earlier in the year. I had never heard that phrase before in the sport, but that’s the way I took it.

I think Feaster has been solid but not spectacular so far. Maybe our expectations were too high. My sources tell me that they expect Feaster back next season. I think he is a big key because he is a very good changeup from Ettiene.

I think Clemson has given a bunch of guys a bunch of great reasons to pick the Tigers. I also think the 2020 class will give Dabo his best class of offensive linemen.