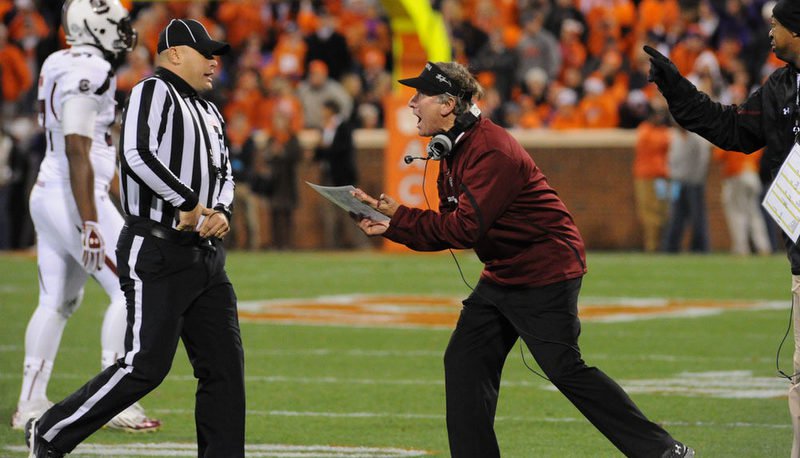 Years ago South Carolina athletic director Mike McGee had a board up in his office with with the results of each Gamecock team's results against Clemson. One month into the spring semester I thought I would update what that board would look like this academic calendar year.

I don't have to remind anyone of the football game this year where Clemson beat the Gamecocks 35-17. I would imagine most Clemson fans would just as soon stop the conversation right there.

Most will remember in men's and women's basketball the Gamecocks won both games in Columbia.

The Gamecocks won in men's soccer 2-1 and the two lady soccer teams split a pair of games.

Both schools compete in men's and women's indoor track, but this is an individual sport until the conferences and NCAAs approach. South Carolina does not compete in men's cross country but the Tigers beat USC in the only meet in which both teams ran in the fall.

The next big event between the two rivals will take place when the two baseball rivals get together for a three game series in a few weeks.

So in head-to-head competition so far, South Carolina has won six times and Clemson has won five.

Speaking of rivalry, is it just me or does Louisville have the makings of a good rival?

I have respect for Rick Pitino and the national basketball power he has built at Louisville. I have not had any exposure to the highly regarded baseball program to this point, but am interested in seeing how they represent themselves. However, the football program has the makings of good rival.

Bobby Petrino is a guy that has a checkered past. He seems like a guy that is easy to dislike. Their defensive coordinator, Todd Grantham, is a guy that Georgia fans point to for having "Thug" players during his tenure at Georgia. They speak to disagreements between clean-cut Mark Richt and Grantham during their days together in Athens.

I received a couple of emails this year from fans sitting behind the Louisville bench this year that stated the Cardinal players came across as "Thugs" during their visit to Death Valley this past year. I noticed trash talking defensive backs even after dropped touchdown passes on deep balls.

This is a program where kids like Shaq Wiggins and Josh Harvey-Clemens can get dismissed at Georgia, can end up. Harvey-Clemens was suspended multiple times at Georgia but like others, he gets another chance at Louisville.

But Louisville took it a step further this week. On Sunday, Louisville accepted a commitment from Devante Fields. Yes, the same Fields that was dismissed from TCU after allegedly beating his ex-girlfriend. The following day Louisville informs long-time commitment Matt Colburn of Dutch Fork High School in Irmo, SC they don't have a scholarship for him this fall. Instead they want him to wait until January to enroll. This led Dutch Fork head coach Tom Knotts to ban Petrino and Louisville from their campus in the future.

So it appears to me that Louisville has all of the makings in its football program for a good rival. Hey if Miami isn't interested in being "The U" anymore, maybe Louisville can be "The L".