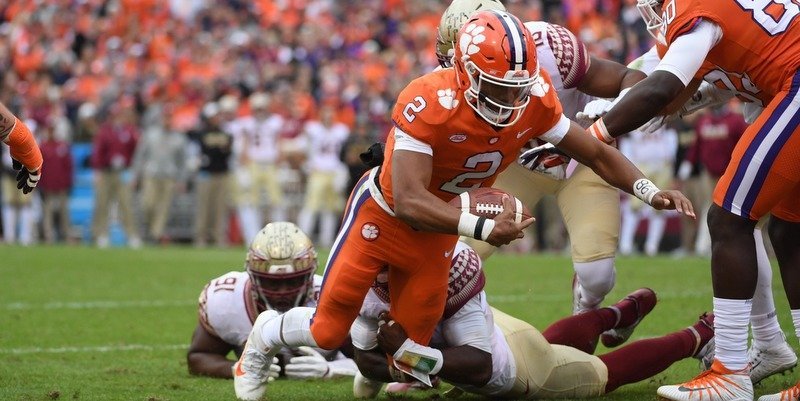 I read the Tigernet story about the battle for the QB position and the need for a better QB performance needed for Clemson to contend for the playoffs and was interested that Trevor Lawrence's picture was there. Ok, let's get this out the way, all Clemson fans were disappointed to lose to Alabama in the playoff last season. Was the performance by Kelly Bryant the key reason for the loss or was the total dominance by the Alabama defense the key reason? Go back and look at the NFL draft and my old mind tells me that there were quite a few Bama defensive players drafted so I lean to Alabama being the better team that night as hard as that is to admit.

I don't have a clue who will be the starting quarterback but I do sincerely hope that all Clemson fans will support the winner. A quick look at last season in a couple of categories shows that good play by the QB is very important but as always, only part of the equation. According to ESPN's QB Ratings, Jake Fromm of Georgia was #6 at 84.1, Jalen Hurts of Alabama was #7 at 83.4 and Alex Hornibrook was #22 at a 74 rating. Why did I pick those, they were the only 3 quarterbacks in the country to win more games than Clemson with Kelly Bryant under center. By the way, Bryant was ranked #17 with a 77.6 rating. Rating are subjective but wins are not and based on wins, the play of the quarterbacks at Clemson were better than all but 3 teams in the country. Not too bad and for me, I hope the QB play is at least as good as last year and the play of the offensive line is better if we make the playoffs again this season.

Bryant did not play well in the Sugar Bowl and there are a bunch of reasons for that. Give Alabama a ton of credit. They were talented, had a great game plan and executed very well. Clemson’s offense missed Tee Higgins and Etienne for much of the game. The line got overwhelmed. Cain’s drops hurt. Bryant was tentative and had some misreads in the passing game and running game. The two interceptions were killers. Finally, field position was a huge factor in the game.

I expect Clemson fans to support both quarterbacks this year. Very few will boo or not support both.

I also expect a huge season for whoever takes the majority of the snaps. Clemson’s quarterback play will be a strength this season and will be part of the reason the Tigers will compete for the national title this season.

Perception is reality and the perception is that Clemson is maybe the best team in the country coming into the season. I agree with you that this year's team is at least among the most talented Clemson has ever and that makes for an exciting but dangerous season. Any team in any sport that makes it to a championship has to overcome many obstacles and this years Clemson team is no different. Injuries play a huge part and the good thing is recruiting success has allowed Dabo to have depth with talent even though short on experience in places. Hopefully, rebuilding is a word that will be a word that will be associated with Clemson football again. Sometimes, complacency is as a big a problem as injuries but again, Dabo seems to have a great knack for not allowing heads to get too big for the hats to fit. Team chemistry is also a huge piece of the puzzle and that is something that changes literally every day. The quarterback position is a key and playing the best person is more than just completing passes but leadership and the resulting confidence in QB 1 is crucial.

The pieces are in place and hopefully they will be moved to the right squares on the board. This is going to be a fun year so we should enjoy the ride every day and leave the moves to the coaches because they know what they are doing. The best is yet to come.

I agree with your email. This is going to be a special year. I think this program has given us a lot of great teams and great memories but this team has a chance to be as good or better than any in school history.

Any idea where CU stands with Quavaris Crouch ? I have not heard anything lately. Are we still recruiting him? Is he a priority?

Clemson is still recruiting Crouch very hard. There is not a lot to report on him at this point. He did not take a lot of visits this summer, but Clemson, Tennessee, FSU, and Michigan are the schools that seem to have the most traction heading into the season.

Do you think we will see two kickers used during the year? I have heard Danny Ford would at times use two kickers one would kick short range kicks and the other would try to kick longer field goals. Huegel can kick from inside 50 yards but Potter could probably go beyond that. Given how great the defense has been the last few years is that something Coach Swinney is willing to risk if the offense gets stopped at the 35 for example?

We have seen this recently. Spencer Benton was the long guy just a few years ago. I can see that scenario playing out this year, but I can also tell you that Huegel has earned the trust of the staff once again. There was a point in the spring where it was not a given that he could return to form but he has answered this fall camp.