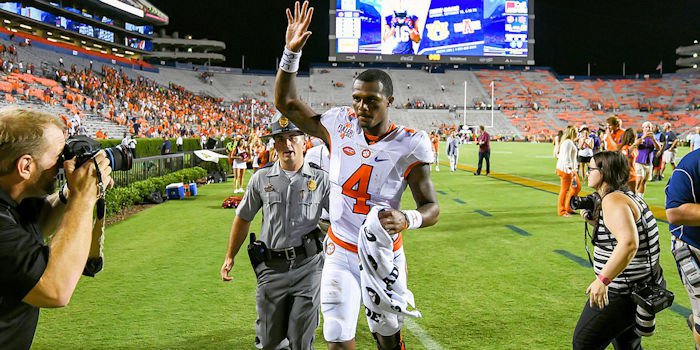 I wanted to ask you about your thoughts on Saturday's game ? Also wanted to see what you think about the Heisman trophy race? Do you think L. Jackson is going to ran alway with it ? Does DW4 still have a chance to win it ? Lastly this is a bit of a odd question but why is it that only one of the buses that Clemson uses to travel with and us to go around the stadium is wrapped ? Thank you

I think you will see two exciting offenses Saturday when Syracuse visits. Syracuse goes faster than any offense I have seen, but I still think Clemson win by about three scores.

I don't think the Heisman Trophy has been decided. Jackson is the leader, but there is still a third of the regular season to play. Also he won't have a championship game to impress. Yes, Watson still has a chance because he has some big games left.

I am not sure on the busses, but will ask and hope to have an answer for you soon.

I am so glad to see your blog back. Living out of the area is difficult, but you bring me closer to Tigertown. Please consider an couple of different options for the blog. I would like to see an e-mail bag more than once a week or maybe you could block the idiots that disrespect you in your comment section each day. You are a Clemson man. They are childish idiots who make themselves look foolish. Keep up the good work. Go Tigers! Hope the Tigers can make it down to my hometown of Tampa.

Thanks for the kind words. We moved into our remodeled home last week and my time was spent moving and unpacking, but I hope to be more active with the blog. I have had several people request more email bags. We may make that move soon. It makes a lot of sense. I would love to come to Tampa. Fingers crossed.

An SEC fan told me on Saturday that his biggest problem with Clemson is that we don't play anyone. The ACC he pointed out was weak unlike the SEC. I told him that 2 of our nonconference games were against SEC teams, but he said that Auburn and S. Carolina were both terrible and didn't count.

When I heard you trashing Michigan on Monday's show it reminded me of my encounter with the SEC fan on Saturday. I pull for the SEC to lose every week because of their arrogance. I try and be very careful to criticize other conferences. I don't ever want to become like an SEC fan.

The SEC is awful this season. The SEC East is a joke. Please ask your friend if he has seen Vanderbilt, Missouri, South Carolina, Kentucky, Tennessee, Georgia, Ole Miss, Mississippi State, Arkansas or Florida play this season. Don't look at the uniforms, stadiums or logos. Just watch those teams play. Please watch those teams and tell me how strong the SEC is. Don't just watch Alabama. I have my doubts about A&M, LSU and Auburn too. This year the SEC is way down.

I agree, I hope this issue doesn't come back to bite. I think Artavis Scott is a much safer option.

If cats are said to have 9 lives, the Clemson tiger breed of cat is using it's supply of lives this year. The game against FSU was one of the most nerve racking games I have ever watched and the victory was certainly was one for the ages but questions and concerns are still around.

With Clemson up 14-0 and 3rd and 1 on the FSU 39, why in name of heaven would a pass play have been called with Wilkins and Lawrence still on the roster? We know the result was an interception and a full circle change in momentum.

Is there something in the Tiger formations that defenses have figured out that caused several passes to the right to be knocked down at the line? I think almost every pass that was knocked down was to the right so was it good defense, good fortune, stealing signs or good coaching that picked up on our formations?

Clearly FSU has many exceptional athletes and we will hopefully not face the speed that we saw from the Noles again this year but because there were open receivers and pass interference flags all over the field pass defense is a concern.

Clemson players, coaches and fans celebrated Sunday morning because of #4 and a relentless defensive pass rush. You cannot be better than 8-0 until you are 9-0 and let's hope that our hearts will not have the stress that the FSU game brought because using up more cat lives is dangerous.

I didn't like the pass of third-and-one. I want to run in those situations. Wayne Gallman is great in short yardage.

The issue with batted passes comes down to the offensive line not cutting or hitting linemen in the chest when they raise their arms. Also Deshaun must find the passing lane.

The secondary needs to find the football better. They need to turn their head and find the ball. But all of college football is featuring physical chicken fighting with defensive backs and wide outs.

Why was a 3-5 Ole Miss team not included in the college football playoff committee top 25? I didn't think that SEC losses hurt much. Perhaps it is because they lost to an ACC school.

Ole Miss received a vote in the coaches poll this week. LOL. I guess they are a few more losses from clinching a spot in the playoff.