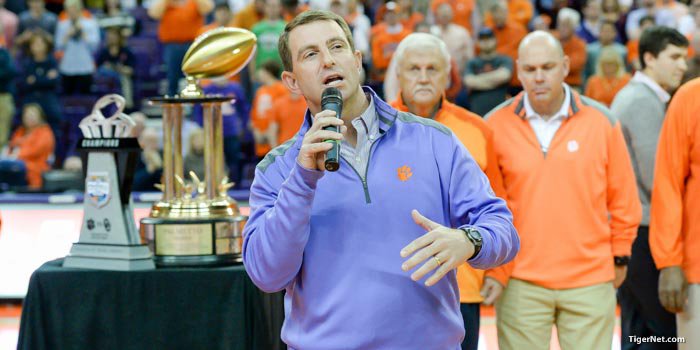 As Bob Hope would have said, thanks to the Clemson team for the memories of a storybook year. Make no mistake, losing to Alabama does not take away from a great season and of course the loss will hurt, but the pride of watching such a season will also be there forever. Thank you Tigers.

One of the best things to come from the season is the respect that the Clemson program has earned but with respect comes expectations and it is not too early to think about Spring practice and the start of a new season. We have to take a step back and think about the defense losing at least 8 starters. With the announcements of all the Juniors jumping to the NFL, recruiting is now an even bigger focus and hopefully it is not too late to convince some big time athletes that Clemson is the place for them. Hopefully there will also be a renewed focus of players respecting each other, respecting the program, staying away from the temptations of college life and not costing their teammates with suspensions. As early as after the Louisville game, I wrote about how suspect the kickoff team was and hopefully, a coach will be designated to work with special teams because that part of the game is absolutely critical as we saw Monday night. The bulls eye on the Clemson jerseys got bigger and bigger with each game this season and it will be even larger this fall. This season can be the start of something that grows and grows and here's hope that more great memories are on the way.

I think the bullseye does get bigger, but that is what you want for your program. Dabo has done a great job of keeping his team's motivated and focused. Special teams were a disaster, and I think this is the number one priority of the off-season. The kick-off coverage team, the punt team and the kickoff and punt return teams need big improvements.

I believe it is better to lose the battle, but win the war. To some degree I think we did that. We lost the game, but won the respect war of those who think they can form public opinion. We are seeing what I will call the Dabo Dynasty unfolding before our eyes! The team made a statement, but none greater than at the end of the game. They could have folded their tents, but that is not the fight this team has shown all year. Alabama understands “finish” and this team now knows what “finish” means. We will miss T.J. Jayron, MacKensie, Kevin and Shaq, but it will not deter our team or change the culture we have built. Every Tiger fan is disappointed in the outcome, but excited about what is ahead of us.

I love the phrase Dabo Dynasty. I have never heard that before. I agree about the end of the game and the guts this team showed. It says a lot about this program.

I know it's too late to matter now, but can you clarify the issues concerning the on-side kick in Monday's game? Should it have been called a violation like the one in the SC game or was there something different about it? The replay clearly showed the ball never touched the ground before it was caught which I understood was the reason given in the earlier game.

Thanks again for covering the Tigers this year. I live in Philly and rely on guys like you and David Hood for Clemson news/coverage.

Just wanted to share my quick thoughts on the National Championship game.

A lot of fans out there seem to be taking the "I am proud of my Tigers, we made it so far, this season was so much fun" approach.

That is fine and I am proud of the Tigers too but I wanted to win.

There are no moral victories when it comes to the National Championship. "If you're not first, your last," - Ricky Bobby. We had a chance to win, may have been the better team and we couldn't finish the deal.

But seriously, the boys better be out for blood. I feel bad for Auburn because Watson and company are going to use the other school from Alabama to take out their anger.

As the news of players staying and departing comes out today, I can't help but think some of the guys have unfinished business. I have new found respect for a guy like Wayne Gallman who wants to come back and finish this thing in Tampa next year.

Anyways, I made it to three games this year (ND, OK and AL)...not bad for a guy who lives in Philly.

I think fans are not into moral victories but are proud of the effort and season. Gallman should have a special season again next season. Hopefully, you can make it down more often next year.

Please, please find someone up there that will convince Dabo to hire a special teams coach. It’s just unfathomable that a team would be so bad at kick-off coverage. To let three different teams run back kick-offs back for TD’s is unforgivable, and if they didn’t run it all the way back they got up around mid-field countless other times. I knew it would eventually bite us in the butt sometime but for it to happen in the biggest game of the year just blows my mind. Someone has got to get through to him that special teams can win you games and they can lose you games. And this time it lost us a game that we never should have lost.

He has a special teams coach. Danny Pearman is the coordinator, and the entire staff has input for special teams. They spend hours each week on it. The issue is personnel. Last season when Pinion was kicking off the coverage was not an issue. He kicked it higher and deeper, but he left early. Lakip got suspended twice this season. Huegel was great on field goals but didn't have the leg strength for kickoffs. When Artavis Scott was healthy, the return game was solid. Scott got hurt, and Fuller is not a natural returner. Next year Scott, McCloud, and Powel may help the return game. Hopefully they can find a kicker who can kick it deeper and higher next season. The scheme is not the issue.

All I want is a kickoff specialist who can put the ball deep enough for a touchback every time! If we can’t do that, kick it out of bounds! I would rather see a drive start at the 35 than dreading every return. We need to pay more attention to special teams next year. We don’t have good kick or punt returns, we don’t cover well enough. We had two onside kicks recovered (even if one was called back, it was still recovered).

I agree. A kickoff specialist is a big key for next season. I do think this program will spend a lot of time trying to improve in all areas including special teams for 2016.

I understand all of the early departures except Green. Will he get drafted? Do you know what his draft grade was? Just seems like there's more to it than "NFL Money" b/c he could make so much more by coming back. Dodd concerned me until I heard he just turned 24 and the NFL doesn't like 25 year old rookies, which is what he would have been if he returned.

Tanner Muse - has the feedback on his development been good? I gotta tell ya, his HS highlight film jumped off the screen at me. A big powerful fast great athlete looked like a STAR in the making. Secondary looks like it's exploding with young talent... The other big kid, #17 Jeffrie... Does he have a mean streak and how about his athleticism? If muse and Jeffries were to become our safety starters, it would look a lot like Kearse/Greene

I think Green will get drafted because he will look good at the combine. He will test well. I saw a report today that has Dodd as a first rounder. He made the right decision.

The staff is very excited about Muse. He is a big body that runs well. He is about 220 and could play safety or SAM. Gibson is a big hitter and a good athlete. The issue with big safeties will always be cover skills. It is hard to find big safeties that can cover.

I have been following the announcements this week about those players electing to submit their names for the NFL draft.

I suppose there are really no surprises. But I was especially interested in Mackensie Alexander. He is listed as a redshirt sophomore. So does he have 2 more years of eligibility? And will he graduate this spring? I know I have no say in these matters and not singling him out but the idea of a player leaving college early with 2 yrs left does not seem correct. Am I missing something here?

NCAA rules say a player must be out of high school three years. Alexander red-shirted due to an injury as a true freshman. He does have two more years of eligibility but is projected by some as a first-round pick, so this was an easy decision.