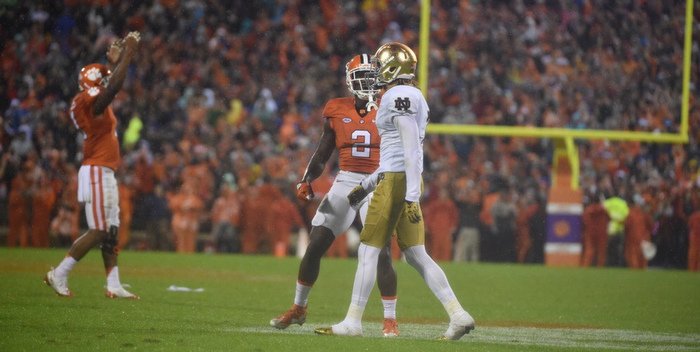 Looks like we have given up 100 points in 6 games. What is your over under for how many we give up the rest of the way? I would say about 120 since we have to play on the road 4 times and have to play SC, FSU, Miami and NCSU. Even so that means 220 points for 12 games meaning 18.3 per game. If we can do that, I think we may run the table as long as DW does not miss time. Also, realistically, how many starters do we lose on offense and on defense? I am thinking maybe only 2 or 3 on each unit. If so, then 2016 could be very special.

This is a tough one. Maybe around 120 sounds about right. As long at Watson is healthy, Clemson will be favored in every regular season game and the ACC title game if the Tigers make it there. The only senior starters right now are Joe Gore, Eric MacLain, Charone Peake and BJ Goodson. The issue will be juniors that may leave early. Mike Williams, Jordan Leggett, Mackensie Alexander, Jayron Kearse, Shaq Lawson, Travis Blanks and TJ Green have been mentioned as potential early entry candidates. To me this is the key to the 2016 season. The fewer juniors that leave, the more special 2016 can be.

After watching Deshaun throw the two INTs on Saturday it seems to me that on those 2 plays he is not stepping toward the WR. His arm motion looks smooth and it can look good but the ball floats when he does not take that step. I'll take the 400+ yards but the INTs are a concern against teams with better offenses.

Watson has had some issues with footwork at times this year. I would say the decisions hurt also. Those balls should not have been thrown. It is hard to criticize a 420-yard performance against the nation's top ranked defense. Watson is the one player that I am not worried about at this point.

I was just wondering if you had heard whether or not Clemson Baseball was still planning to keep "Omaha" on the back of the hats? Personally, I think this was always ridiculous and not befitting of a true champion. I hope they're doing away with this gimmick.

Also, I know his opinion doesn't matter, but I can't recall a more idiotic statement from a so-called "expert" than Todd McShay (ESPN) saying there are 10 more draft-eligible players on Notre Dame's team than on Clemson's (except for injured Mike Williams). How can anyone possibly come to that conclusion? Kearse, Alexander, & Lawson would all be 3rd round picks at worst. There can't be 10 Notre Dame prospects better than that. That's absolutely ludicrous, has no one called him out on that? I hope the players are getting that feedback, I know it motivates me on their behalf.

I know Notre Dame is talented, but I can't see that much of a gap with Clemson. Maybe Clemson is younger. Watson, Scott, Wilkins, Cain, McCloud and Hyatt are not draft eligible. Maybe it is a factor that Clemson is younger than the Irish. That may be his opinion, but I sat in Death Valley on October 3rd and I saw who won the game.

I really enjoyed your blog "The Window". Your comments actually reminded me of a conversation I had with one of my best friends (a die-hard FSU fan) earlier this summer.

He asked me what I thought about Clemson's chances this year, as far as winning the ACC. I personally thought we had a really good chance this year, but I definitely expected the 2016 year would be our best year for the ACC Championship, and to possibly go all the way and win it all for the National Championship.

I considered that DeShawn Watson would have a full season under his belt, that the starting defensive line would also have another year of experience, as well as the 2nd group getting valuable playing time. We have a 5 star running back coming in next year as well, who is a "burner" and great receiver out of the backfield. All around, I think our total team experience and depth will be better next year, as long as we don't lose too many junior's leaving early. Look forward to your thought on this.

Clemson is young and talented in many areas and 2016 could be another special season. This week 20 of the 24 starters including the punter and placekicker could return next year. On the two deep this week, 39 of the top 45 players could return. They key will be the draft eligible juniors that may opt to leave early.

Also the schedule is a little more difficult. The Tigers have to go to Auburn, Florida State and Georgia Tech next season. At this point it is hard to say if Auburn and Georgia Tech will rebound from a disappointing 2015.