Kelly is the first player in New York high school football history to pass for 2000 yards and rush for 1000 yards in the same season.

Kelly, a 6-3, 205-pounder, is the nephew of former Buffalo Bills quarterback Jim Kelly, and he said that he sometimes gets tired of the comparisons.

“A lot of people do try to compare me to him, and they say ‘You’re not anything like him’ and things like that,” Kelly told TigerNet Friday night. “I just tell them that I am still in high school, and I tell them that they didn’t see my uncle in high school. I just try to brush it off, but I hear it a lot.”

Not that Kelly isn’t known as a good player, however, as he has offers from Syracuse, Rutgers, Alabama, Florida State, Clemson, University of Buffalo, Western Michigan and Cincinnati. And he expects another offer from an ACC school this weekend – Miami, where his Uncle Jim played.

“Yeah, my dad [Jim’s youngest brother] said Jim was down there this weekend, and he was talking to the coaches,” Kelly said. “He told me to expect something from the Hurricanes either tomorrow or Sunday.”

Kelly said he has no leaders at this point. 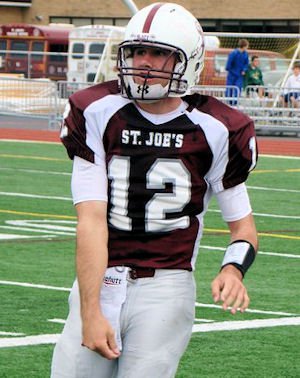 Kelly is the first player in New York high school football history to pass for 2000 yards and rush for 1000 yards in the same season. "

Kelly passed 2,159 yards last season, with 24 touchdowns, and he was also the first player in New York high school football history to pass for 2000 yards and rush for 1000 yards in the same season.

“It was a lot of fun. It says a lot about my team because we played against some wonderful, wonderful teams,” he said of the feat. “I think the fact that I was able to accomplish that said a lot about my team. It wasn’t just me who did that, it was my whole team. It took a team effort.”

Kelly was asked if he considered himself a dual-threat quarterback – a must in Morris’ offense – and he said yes.

“I do consider myself a dual threat quarterback,” he said. “I think I am a real athletic quarterback. I can run and pass. I just try to do whatever I can to put my team in the best position possible to win. I think my strengths are being able to run down field while keeping my eyes down field and finding the open guy. Probably, my main weakness is standing in the pocket too long trying to find the open man before I take off down field.”

And how did the Tigers find about Kelly?

“We actually sent them my film and I emailed them to see if they had looked at. Coach Morris just got a hold of me and offered me a full scholarship.”

Kelly said he enjoyed his conversation with Morris.

“I talked to Coach Morris for a long time,” he said. “He wants me to come down for Clemson’s spring game on April 9th and try to get down there right away. He says that he likes my athletic ability and thinks that I can be a key asset to the team right away. We talked about the style of offense that he runs. It’s a pro-style offense. It’s the same style of offense that I run at my high school, so I think that I would fit in real well.”