Andre Ellington’s 166 rushing yards were a career high today. His previous high was 140 against Auburn earlier this year.

CLEMSON – Safety DeAndre McDaniel went into the Clemson locker room at halftime, found freshman tight end Vic Beasley, and told him that the Tigers were going to beat Georgia Tech, and that he was giving all of the credit to Beasley.

Beasley didn’t see the field on Saturday, nor will he play this season, but he played the part of Georgia Tech quarterback Josh Nesbitt for the scout team this week, and McDaniel said that preparation was the reason the Clemson defense was able to hold Nesbitt and the Jacket option attack down.

“I went up to him, and I told him thank you, because he was the reason we were prepared for Nesbitt,” McDaniel said. “Beasley is big [6-4 255] and he gave us a great look all week. He ran the option great, and he had us ready for it. He didn’t throw it all that well, but he didn’t have to. We were ready for them today.”

McDaniel’s interception of Nesbitt with 3:13 remaining sealed the Tiger victory, and McDaniel took a victory jaunt almost into the crowd as he celebrated the win. 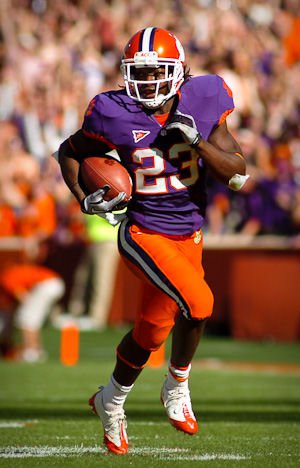 Andre Ellington’s 166 rushing yards were a career high today. His previous high was 140 against Auburn earlier this year."

“It felt good,” McDaniel said of the interception. “But I have to give that interception to my teammate, Jonathan Meeks, who played good all game. He tipped it up, and when he tipped it up I just went and got it. We knew it was crunch time and they were going to throw it, and the main goal was to get the turnover. When I went over to the sideline, I was just trying to tell the fans I appreciate them.”

“This was our best day yet on both the offensive and defensive side of the ball and on third down [Tigers were 9-of-15],” Swinney said. “We had a great week of preparation thanks to Brad [Scott] and Danny [Pearman] and the rest of the coaching staff. I was confident coming into this game after the way we’ve been practicing. Overall, we’re getting better as a team. We have great leadership and our team is full of determination. We’re finally getting our swagger back.”

The Jackets won the toss and elected to defer, and it appeared that three quick passes had doomed the Tigers to a three-and-out. However, punter Dawson Zimmerman was run into on the punt, and the penalty gave new life to the Tigers.

The first play after the penalty was the first rush of the day, and Andre Ellington split the middle and raced down the left sideline for a 55-yard touchdown and a 7-0 Clemson lead barely two minutes into the game.

The teams traded possessions – Clemson forced Georgia Tech into two punts but the Tigers missed on a short field goal – and Clemson took over at its own 20-yard line following Tech’s second punt. A one-handed grab by Nuke Hopkins on the sideline on third down kept the drive alive, and Clemson capitalized on a 38-yard field goal by Chandler Catanzaro for a 10-0 lead.

Clemson forced Tech into another punt, and the Tigers continued their offensive explosion, taking six plays to go 74 yards. Andre Ellington raced down the right sideline, cut back on a defender at the 15-yard line and ran into the endzone for a 42-yard touchdown and a 17-0 Clemson lead.

The Jackets finally put a scoring drive together just before the half, getting a 26-yard field goal by Scott Blair with 23 seconds remaining, and Clemson led 17-3 heading into the locker room.

Tech followed up their 25-play drive that ended the half with another strong scoring push, taking the opening kickoff of the second half and marching 11 plays and 66 yards. However, Clemson kept them out of the endzone and Blair kicked his second field goal of the day – a 26-yarder – and Clemson’s lead was trimmed to 11 at 17-6.

The Tigers responded in the best way possible, with a touchdown drive.

Clemson converted two third-downs on the drive, including a big one to tight end Dwayne Allen at midfield. The second one was a 10-yard pass to Ellington that scored the third touchdown of the day for the running back and Clemson, and the Tigers led 24-6.

Georgia Tech went on another long march late in the third quarter, but this one resulted in their first touchdown of the day. Facing a 4th-and-6 at the Clemson nine, Nesbitt rolled out and hit Anthony Allen for a touchdown on the last play of the quarter.

Clemson was forced to punt on the ensuing possession, but Tech missed a 49-yard field goal by Blair and the Tigers took over at the 32-yard line.

It was at that point that the Tigers put on the kind of drive normally made by Tech. Clemson held the ball for 15 plays, most of them runs by Ellington and Harper, and broke the will of the Tech defense along the way.

The Tigers drove down to the Tech four-yard line, and Catanzaro drilled a 21-yard field goal with 3:28 remaining to put the Tigers up by two touchdowns. McDaniel intercepted tech’s first play from scrimmage, and the Tigers simply ran out the clock on a critical victory.

”It says a lot for us to have our longest drive of the year at the end of the game with everybody in the stadium knowing we’re going to run the ball,” Swinney said. “The fact that we could line up and continuously run the ball showed our dominance.”

“They’re [Clemson] a physical football team,” Johnson said. “Those defensive linemen are going to play in the NFL. They whacked us around. You’ve got seniors whacking around freshmen and sophomores. That’s what happened.”

Nesbitt needed just 44 yards to pass for Clemson quarterback Woody Dantzler as the ACC’s all-time leading rusher for a quarterback, but obviously 42 yards short of that goal.

”We did an excellent job in stopping Nesbitt in this game,” Swinney said. “Nesbitt came into the game needing only 44 yards to beat Woody’s all-time rushing record for quarterbacks in the ACC. He’ll have to get those yards elsewhere.”

Ellington finished with a career-high 166 yards on 20 carries, and his three touchdowns give him 12 for the season, which leads the ACC.

“I give my teammates the credit,” Ellington said. “Without those blockers, I wouldn’t be able to do the things I did. Today was really special after falling short last year in two games against Georgia Tech. We had good preparation. We are going to take each game at a time and try to win them all. Our defense played a great game all game. We are very confident heading into the rest of the season.

Clemson returns to action at noon next weekend when they travel to Boston College for a noon matchup against the Eagles, who have dropped five straight games and lost three defensive starters to injury in Saturday’s 24-21 loss to Maryland.