By then, the Kyle Parker saga should be over and Clemson football coaches and fans will know if Parker will be under center for the Tigers this fall or if he will be the sole property of the Colorado Rockies, the MLB team that picked him 26th in the first round of last month’s amateur draft.

TigerNet spoke with Cathy Parker, Kyle's mother, on Thursday and she said that the Rockies had to petition Major League Baseball to get the deal done by that July 20th date so that Kyle would be able to give the Clemson coaches a heads up on his plans.

"They [the Rockies] have petitioned for a decision to be made by July 20," Cathy Parker said. "That would be the latest and we said that was good with us. We got behind because of the College World Series and everything, so that put us behind in being able to talk about that. The club itself, they usually don’t sign players until at least August 14th or something like that, but they just wanted to make sure that everything went smoothly so that everything could be done by July 20th.

She said that the family enjoyed their trip to Denver to meet with Rockies’ officials, but no money matters were discussed - it was simply a way of introducing both parties to each other and letting Kyle see the stadium and meet some of the current Rockies.

"We had a great time, but we don’t know anything yet," she said. "They are going to be working on it. But what the options are right now … we haven’t done that. We just took that trip to see what they are about. We got to meet the people in the organization, and they were very kind. They seemed to be men of integrity and they did things that would impress a parent. 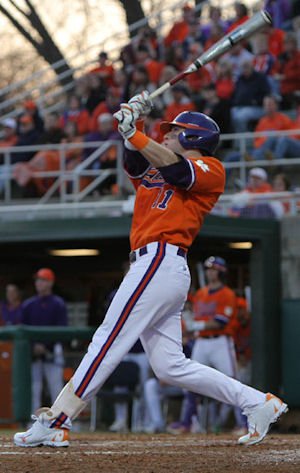 "We know that it would be a while before he would actually play in Colorado, but we feel like he has a great opportunity. We just have to wait and see what all happens. We didn’t really talk about numbers or that kind of thing. We just wanted to see the facilities."

She said that they also got to watch him take batting practice in hitter-friendly Coors Field, and she will always remember watching Kyle’s joy as he hit.

"Kyle got to meet the players and he did take BP with them," she said. "That was an exciting thing for him to be able to do. He hit several out and did very well. It was really neat. Of course, we were sitting in the shade, and they had not let the fans into the stadium yet. I just wanted him to do well and enjoy it, and I could tell he was enjoying it because he was really hitting it."

One of the rumors circulating, one which the Colorado papers have said is a fact, is that the Parkers have given the Rockies two separate signing numbers " one that would make Kyle baseball-only and another that would enable him to come back and play his sophomore season as Clemson’s quarterback " but Cathy Parker said that is not the case.

"That is NOT true because we have not talked numbers with them," she said. "The only thing that we did is before the draft, we just said that Kyle will not be your normal draft pick that is going to be happy to leave no matter what you give him. Because he is not going to just walk away from football, and we did not want a team wasting a draft pick or not knowing what they were getting into up front.

"They said that they appreciated that, and they said "We know, we have dealt with that before." They are very familiar with working with dual-sport athletes, and their comment was that they knew what they were getting into. But no, we have not talked numbers with them, but I hope that happens quickly."

Cathy said that Kyle is very well aware that decision-time is looming, and even as his mother she is unsure of which way he would lean.

"Kyle has always loved both sports, and he has always wanted to play professionally as a living," she said. "I think he wants to be wise in his decision, and he knows that there will come a time soon when he has to make that decision. I don’t know what he will choose right now. Is he willing to do both? Absolutely.

"I just don't know what is going to happen with that right now. There are risks with doing both and he knows what those are. But he loves his [Clemson football] teammates. I don’t know exactly what the Rockies want him to do and neither does he."