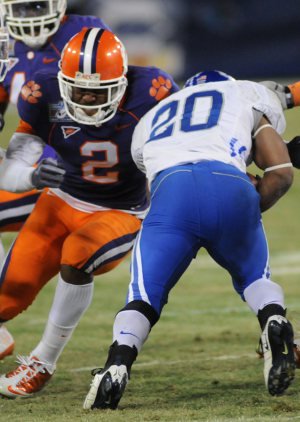 McDaniel finished the season with eight interceptions which tied a Clemson single-season record.

NASHVILLE, TN – Will he go or will he stay?

DeAndre McDaniel, the junior safety out of Tallahassee, has a tough decision to make in the next few weeks in deciding whether to return to Clemson for his senior season or forego his eligibility and enter the NFL draft.

McDaniel said after Sunday night’s Music City bowl win, however, that he was leaning toward returning and getting his degree, especially considering that he is hearing that he would be a second round pick in the draft.

He has not yet received a grade from the league.

“I feel I am better than second,” McDaniel said after the bowl game. “I am leaning toward coming back and getting my degree. That is one of my main focuses. I am sure I will know something in the next week. I am playing for that first round spot, but it is what it is. If it is the second round, I am coming back. It will have to come down to my gut feeling, and right now, everybody is telling me that it will be the second round.”

McDaniel finished the season with eight interceptions, which tied a Clemson single-season record, and said that several players have personally asked him to return. He also said he was sure the Clemson coaching staff would want him to come back.

If McDaniel needs any inspiration in his decision, he needs to look no further than Tennessee safety Eric Berry, who had a great season last year in his sophomore year, and decided to forego the draft and return to the Volunteers for his junior campaign in order to improve his draft status.

Berry won the Jim Thorpe Award as the nation’s best defensive back this season, and is now projected as a Top 10 pick in this year’s draft.