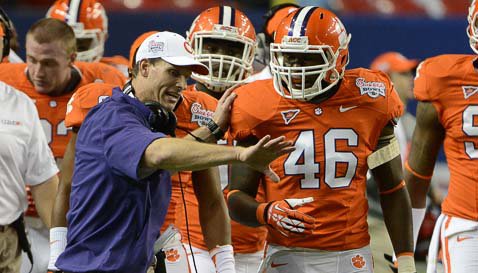 Venables then turned to a reporter and called the victory a “program changing win” that has him excited not only about the future of the Clemson program but about his defense as well.

I asked Venables what he meant about the program changing win, and he said a lot of it had to do with the opponent Clemson defeated.

“Because of who it was against,” he said. “That team is a model of toughness, consistency and physicality. That is what you desire to be and viewed as. That is a team that played for the national championship less than 12 months ago and was just a few plays away from playing for it this year. That is a very talented football team that we beat. To beat them in the fashion that we did, to fight through adversity in all three phases of the game was a team effort. It was a team win.”

“We just stood there on the sidelines and watched our guys impose their will longer, harder and tougher for four quarters,” Venables said. “We matched their physicality and then gave a little bit more. That is all about attitude and desire and hopefully our guys can build from that. We have a good strong foundation to build from. After we celebrate this one there will be a lot to look forward to.”

Clemson came out determined to stop the run, and frequently loaded up the “box” around the line of scrimmage with seven and eight defenders, daring LSU to throw the ball. Venables said that was the game plan from the beginning.

“Obviously, you have to stop the run. We had to press our guys on the outside and they are a really good play-action team,” he said. “We had to put our corners on an island and bring our safeties up and let them help out on play action. But we had to win the battle up front, first and foremost. We had to fit up the run the right way, get off crack blocks and fight off double teams. We had to seal the 275-pound behemoth fullback and hit him flush. We wanted to change the fronts up some and challenge the run game in a purposeful way. Guys really did a great job in their preparation and guys did a great job in understanding what they had to do.”

Malliciah Goodman
Sr. Defensive End
#97 6-4, 270
Florence, SC
View Full Profile had perhaps his best game in his last game as a Clemson Tiger, but it was the group of defensive tackles that includes Josh Watson

Reader and Jarrett consistently pushed the pocket backwards, and Venables credited the group with making a difference in the outcome.

“We had to have a collective effort in order to do well, a lot of moving parts,” he said. “But you can’t do it without those guys doing the job up front. They created another line of scrimmage. They were getting off of blocks and disrupting the passing game. They were beating seven and eight-man protection packages and winning that battle. They never allowed the quarterback or their offense to get into a rhythm.”