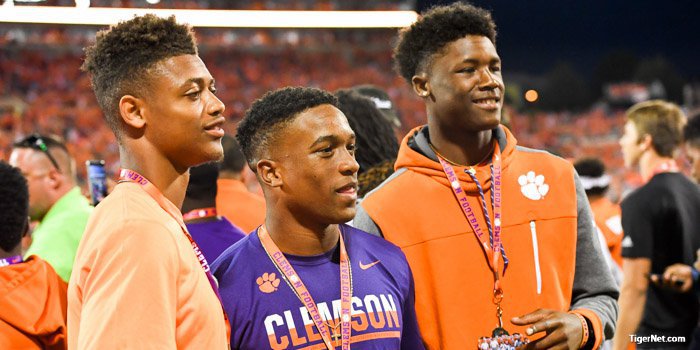 A.J. Terrell (L), Amari Rodgers and Tee Higgins on the sidelines before the game

Most of Clemson's talented list of commits were in the house and several top uncommitted prospects in the nation including 2018 quarterback Trevor Lawrence and 2018 defensive end Xavier Thomas.

Here is what they have to say about the game and the evening:

The Best Atmosphere I've ever been apart of, and we left with a W??5-0 #WeTooDeep ?????? pic.twitter.com/HoTRpeuzBo

Last night was probably the best game I've ever experienced! So glad I will be a clemson tiger in less than a year????#ALLIN

Finally back in tigertown????

Had another great visit yesterday at clemson ???????? #ALLIN pic.twitter.com/cGCIz8yXdz

If you happened to miss the most live game last night, well... I got you! #WE2DEEP #ALLIN #GoTigers pic.twitter.com/qTYnWDZf8k

Death Valley is officially the most lit place on Earth

With Josh Belk on a recruiting visit at Clemson. Coach Richardson and Coach Brooks were awesome! pic.twitter.com/GEMuZQXAAX