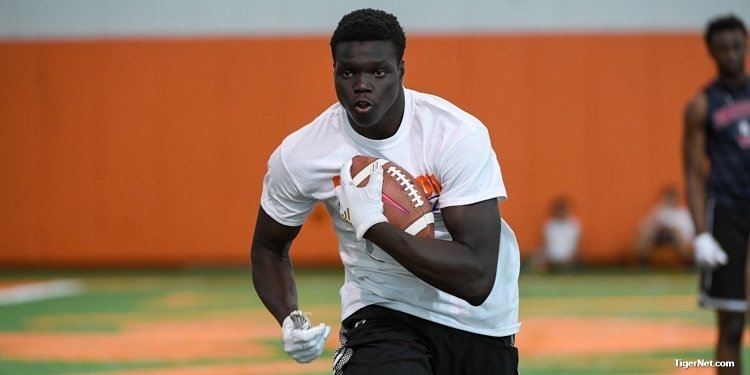 Ajou commits after making his second stop on campus.

Fresh off of an All In Cookout stop, 2020 receiver prospect Ajou Ajou saw what he needed to make a commitment to being a Clemson Tiger.

"First off, I would like to thank the man above us all, for guiding me along this amazing journey," Ajou posted on Twitter. "My journey hasn't always been the easiest but I will be continuing my grind @ Clemson University."

A rising prospect in the recruiting world, Ajou is originally from Alberta in Canada and is set to play for Clearwater Academy International in Florida.

Ajou had over 30 offers, which included Alabama, Penn State, Texas A&M, Auburn, Florida, Nebraska and Tennessee. He took an official visit to Nebraska, which was one of the schools a bit closer to his hometown in Brooks, Alberta. He added a Clemson offer in June after attending Clemson camp.

His recruitment really picked up from the spring on, where he added the offers from Alabama, Texas A&M and the numbers increased into the summer.

Ajou is the first receiver commitment in the Clemson 2020 class, which has another target in E.J. Williams who visited at the All In Cookout as well.

Great day to be a Clemson Tiger?? #ALLIN #WRU

My brother welcome to the family, this is going to be something special???? #ALLIN???? https://t.co/gUIV40Wk1t