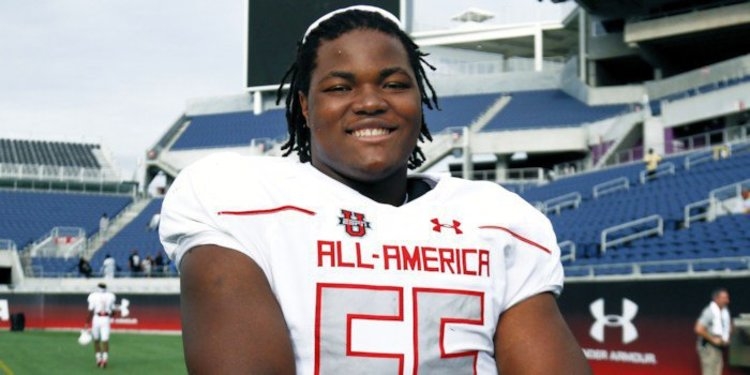 The nation's No. 1 recruit Rashan Gary received the Bobby Dodd National High School Lineman of the Year award from the Touchdown Club of Atlanta on Thursday night.

Gary was interviewed by reporters about his intense recruitment leading up to National Signing Day and his official visit to Clemson.

"It's getting crazy. A lot of college coaches are trying to get back into the fight," Gary said. "It's just me and my mom and my family handling it. It's getting crazy, but I'm enjoying it."

Gary confirmed that he would be taking his Clemson visit. His other official visits have been to Michigan, Ole Miss, Auburn and Southern Cal.

"Right now, I'm headed to Clemson after this (award ceremony) and I guess that Sunday when I come back, me and my family are going to sit down and Sunday night my decision will be made. I only went to Clemson once and I got a good feel and I am going back to make sure that feeling has not changed plus my uncle lives fifteen minutes away so I would get to see him."

Gary unofficially visited Clemson during the Easter holiday, but some of the coaches were not in town.

There is still a chance that he takes a recruiting trip to see Alabama or Auburn this weekend.

"I was talking with Nick Saban a couple hours ago, so that is in the works," Gary said. "He was just telling me that Bama really wants me and give them another try before I leave here."

The consensus #1 recruit will have a large support system on Sunday when he finalizes his college decision.

"It will be me, my mom, my step-dad, my cousin and my aunt. It might be a hundred of us at the table. My family is big, and their opinion matters. It will be a hard decision but Sunday night my decision will be made."