In-state 2016 outfielder Chris Thompson from JL Mann(HS) has committed to Clemson on Friday according to his twitter account.

Thompson is 5-11, 155 pound switch-hitter that was a 2014 Underclass Honorable Mention winner. 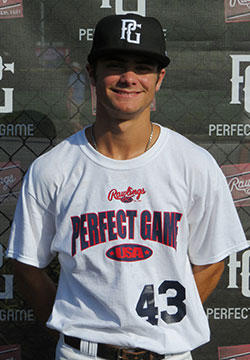 Here is his scouting report from perfectgame.org:

Medium frame, lithe athletic build with good quick twitch athleticism. Switch hitter with quick hands and loose swing actions from both sides of the plate. Hits from an open stance with an upright setup in the batter's box, quick hands and solid bat speed with lift in swing from the right side, compact plane, most natural right side, short contact oriented swing from the left side. Plus runner, 6.61 60 yard dash time translated well to games, stole bases at will and posted good home to first times, good aggression on bases. Good athleticism in center field as well, covers good ground, accurate throws with a quick release, routes need work defensively but has the speed to outrun his mistakes currently and with improved routes has potential for plus range. Good student. Named to the Southeast Underclass Showcase Top Prospect Team.

I'm proud to say that I have committed to play baseball at Clemson University!??