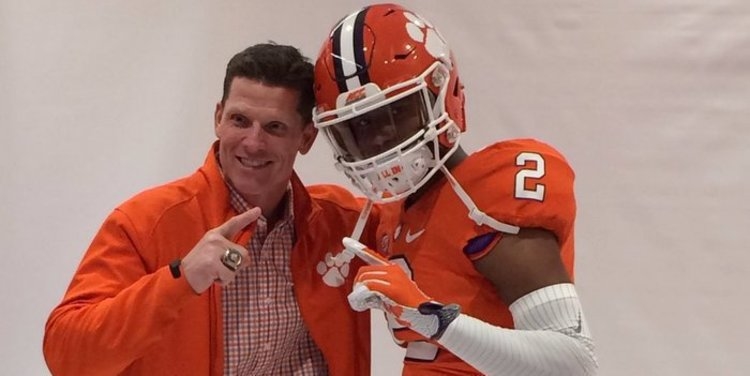 Clemson DB prospect Kyler McMichael has made a big impact on the offensive side of the ball this season. (Photo per McMichael Twitter account)

Kyler McMichael improved on an already remarkable yards per carry average to clinch a region crown for Greater Atlanta Christian.

McMichael, a defensive back commit for Clemson, averaged 11.8 yards per carry in his first nine games, and against Dawson County Friday, the 6-foot-1 and 195-pound athlete rushed for 139 yards on five carries.

McMichael ran for scores of 70 and 52 yards, bringing his season total to just short of 1,000 yards with 21 touchdowns in 10 games.

GAC captured the 7-AAA region title and improved to 9-1 on the season.

Before the half, w/ less than 20 seconds left, everyone expected a QB kneel. Nope. They got #Clemson commit @kylermc22. @PaulStrelowTI pic.twitter.com/IjLEA677Y2

South Pointe and its Clemson commits rolled on in the playoffs with a 67-14 win over Midland Valley. Kendrick tossed a 56-yard touchdown pass to get things rolling and later rushed for a 44-yard score. He totaled three carries for 58 yards and connected on 5-of-7 passes for 106 yards. Placekicker B.T. Potter was 6-of-6 on extra points.

Kendrick, a Clemson receiver target, has thrown 22 touchdown passes to five interceptions, with a 71.6 completion rate. He’s rushed for 10 touchdowns and over 700 yards (737).

Lawrence has connected on 36 touchdown passes to one interception this season, throwing for 2,843 yards in mostly first-half action.