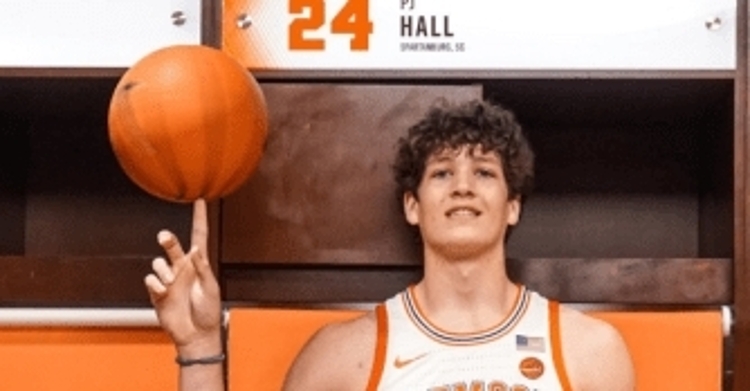 PJ Hall is rated as high as the No. 60 player in the nation.

“I’m extremely excited about the addition of P.J. and O-Max to the Clemson Basketball family,” said Brownell. “They are both highly regarded players who come from outstanding families and will add tremendous size, length and versatility to our team. These two hard-working young men have the ability and the opportunity to make a significant impact on our program. Our fans will certainly be excited to watch them play next season.”

Hall is a 6-10, 235-pound forward from Spartanburg, S.C. and is rated as a four-star prospect according to both ESPN and 247Sports. ESPN ranks Hall No. 60 in its Top 100 for the 2020 signing class. He is rated the No. 1 prospect in South Carolina and 10th at his position nationally. 247Sports lists Hall as their No. 61 overall prospect and the No. 9 player at his position in the country. Rivals ranks him at No. 62 in their Rivals150.

“P.J. is a strong, physical post player with a shooting touch that allows him to play both inside and outside. He comes from an outstanding Dorman High School program coached by Thomas Ryan, where he has won back-to-back 5A State Championships. His passion for basketball and willingness to work gives us great excitement about his future at Clemson.”

"Family's the most important thing, and that's the reason I fell in love with Clemson University," Hall said. "I went up there and my last visit in the fall was amazing. We were on a visit, but it didn't feel like a visit. It felt like I was a part of the basketball team and a student at the university.

"That was the reason I couldn't say no. Coach Brownell recruited me two years very hard and I can't wait to play for him for the next four."

As a member of Upward Stars (SC), Hall averaged 14.8 points and 4.8 rebounds per game on the adidas Gauntlet in 2019. Hall’s best game came against the Atlanta Celtics, scoring 27 points and grabbing 14 rebounds.

Prosper is a 6-7 versatile forward from Montreal, Quebec, Canada and is rated as a four-star prospect according to 247Sports. He is ranked No. 82 overall and as the No. 15 power forward in the 2020 247Sports Top247.

“O-Max is an athletic forward with the skill set and versatility to play multiple positions at Clemson. He’s an extremely hard worker who is dedicated to improving his game. Our coaching staff was impressed by his talent and competitive spirit at such a young age and feels like O-Max has a very bright future in basketball.”

“Thank you to Clemson University and Clemson Basketball for giving me the opportunity to be part of the family and providing me with the platform to expand my game. This is only the beginning,” Prosper posted the day of his commitment.

Prosper spent last season at Lake Forest Academy in Illinois and transferred to the NBA’s Latin American Academy in Mexico City to finish his high school career. He will graduate early and reclassify and join Clemson for the 2020-21 season.

Prosper played for Brookwood Elite (Canada) on the adidas Gauntlet in 2019. He averaged 11.2 points and 4.5 rebounds over six contests. He shot 43.4 percent from the floor. Prosper’s best game came against the NY Jayhawks, finishing with 17 points and nine rebounds.

• No. 1 ranked player in South Carolina

• First-Team All-Tournament at the 2019 Caribbean Classic