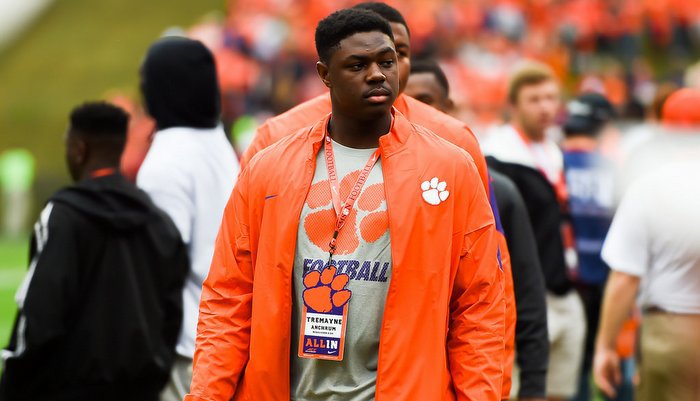 3-star offensive guard Tremayne Anchrum Jr. from Powder Springs, Georgia will announce his college decision on Thursday afternoon around 3:30 (delayed 1 hour so teammates can watch) according to a text from his father to TigerNet.com.

His three finalists for tomorrow are Clemson, Colorado and Nebraska.

TigerNet.com spoke with Anchrum Jr. last week and he had impressive things to say about Clemson's coaching staff while on his visit attending Clemson's 23-13 win over Florida State.

“Talking to Coach Swinney and seeing the offensive line and the players, I was very attracted to it.,” Anchrum said. “I saw the way Coach Dabo is and when I talked to him in his office, he's very good at inspiring people and making people do things that they didn't believe they could do. Seeing him with his players, he's really created a great atmosphere to be around, and that's why I wanted to bring my family back around. It was just such a wonderful atmosphere. Everybody believes in what they're doing. You can see it from the lunch ladies to the staff to the coaches and the players, they all believe in it. I had to come back to make sure I was attracted.”

He also had some excellent things to say about offensive line coach Robbie Caldwell with regards to his personality and his knowledge of the game.

“I love the man. He's a great coach,” Anchrum said. “He's a great person. He loves his offensive line like they're his own kids. He's a little older so he has a lot more wisdom and knowledge under his belt and it really shows. The players say you'll hate him at first, but you'll learn to love him because everything he says turns out to be right. I appreciate him. He thinks I have a lot of potential in where I can play and how I can progress and work. He thinks I can take my talent very far.”

Anchrum Jr. wants to study meteorology or possibly something in the nature field.