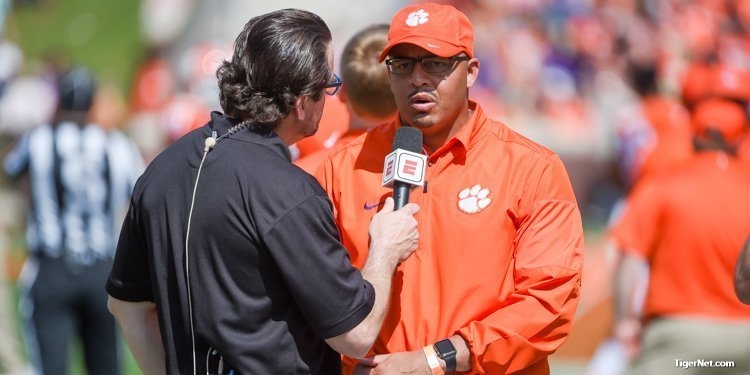 Elliott is a talented coordinator at Clemson

It's near the end of the season and rumors and changes of coaching gigs are the norm in college football.

Over the weekend, Clemson co-offensive coordinator and Broyles Award winner Tony Elliott was listed as a possible candidate for the North Carolina job by several outlets including ESPN and CBS Sports.

It appears that the job will reportedly go to 67-year old Mack Brown and an announcement could happen as soon as Tuesday.

Elliott spoke about the coaching rumors for this time of the season and his future outlook.

"Man, to be honest - I don't know. I haven't really thought about it," he said about other jobs. "I kinda hate this time of year from the standpoint that I have an unbelievable group of seniors and an unbelievable group of running backs on offense who have been extremely committed to this program and have been unselfish and they've been loyal and committed and I don't want to be a distraction in any sense of the matter to those guys. That stuff, that's the Lord's stuff and the Lord's timing."

Elliott is focused on Clemson and trying to have the best finish possible.

"All that stuff will have its place but right now we're in the midst of a championship run and all my focus is on that and on Clemson," he said. "I owe that to this program and to coach Swinney and this staff and these players that they get my best. If y'all follow me on social media, I don't go on social media so I really don't know what's going on out there but you do get text messages and whatnot. My focus is on Clemson football. I'm at home here. My boys were born here. I love it here so I haven't really given much thought to what lies beyond next week."