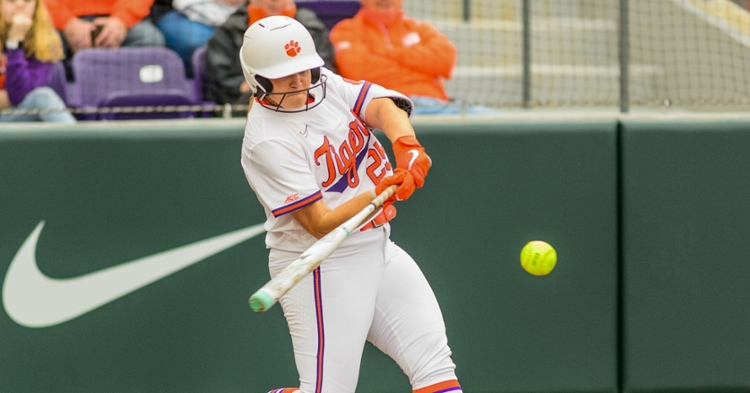 Guimbarda is tied for the NCAA lead with 10 homers

CLEMSON, S.C. – The Clemson Softball team, now 16-7 overall on the season, won its 11th straight game at Clemson Softball Stadium as the Tigers took down Charlotte (11-12) by a score of 11-2 in five innings in game No. 2 of Wednesday’s doubleheader. Junior utility player Marissa Guimbarda tallied five RBIs and her second home run of the day on a three-run shot to center field in the bottom of the second inning. As a result, Guimbarda is now tied for an NCAA-leading 10 home runs on the season.

Freshman righty Emma Whitfield improved to 2-0 on the season and earned her first complete game in the circle.

Guimbarda got the Tigers on the board on what appeared to be a three-run homer, but the umpires ruled that a Clemson baserunner passed a preceding base runner, which caused on out on the play and resulted in a single for Guimbarda. Both Cammy Pereira and Valerie Cagle scored on the play to give the Tigers a 2-0 lead.

Redshirt freshman Ariella Oda ignited a seven-run inning in the second for Clemson after walking with a full count and bases loaded to put the Tigers up 3-0. Then, Periera recorded her first of two sacrifice flies on the day, which was followed by a two-RBI single up the middle by Cagle.

Guimbarda extended the Clemson lead to 9-0 after - this time successfully - going yard to record her 10th homer of the season as the Suwanee, Georgia native blasted a three-run shot over the left-center field fence.

Oda smacked her first extra-base hit of the season in the bottom half of the third, driving in JoJo Hyatt from first, and showing off her speed on the basepaths. Then, Pereira registered her second sacrifice fly to left field, which allowed Oda to score the Tigers 11th run of the game.

The 49ers scored their pair of runs in the top of the fifth on an RBI double down the left-field line which was followed by an RBI single to left field.

On the season, the Tigers have outscored their opponents 92-29 inside Clemson Softball Stadium.

Up next, Clemson returns to Clemson Softball Stadium this weekend (March 6-8) to host Pitt (6-9, 1-2 ACC) in the Tigers’ second ACC series of the season. All three games against the Panthers are slated to stream on ACCNX. To purchase tickets, visit ClemsonTigers.com.