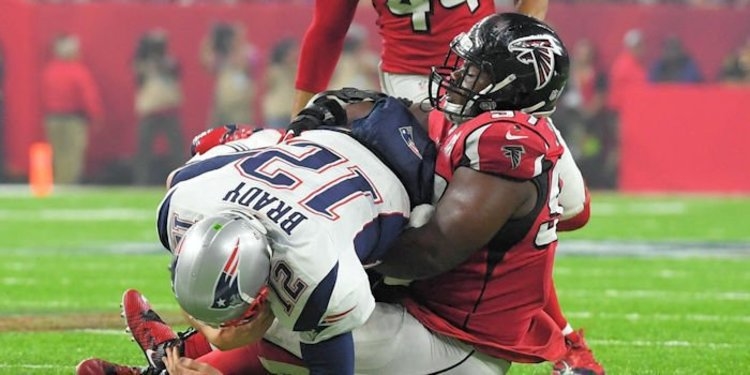 Jarrett and the Falcons agreed to the extension right before the 4 p.m. deadline.

“As we have said since the end of the season, getting a deal done with Grady has been a priority and we are pleased to have accomplished that today," Falcons general manager Thomas Dimitroff said in a press release. "Grady is an integral part of our organization and we look forward to moving together for many years to come.”

He was drafted in the fifth round out of Clemson in the 2015 NFL Draft. The former unheralded two-star prospect had 207 tackles, 29.5 tackles for loss, 5.5 sacks, 37 quarterback pressures, one pass break up, two caused fumbles and four recovered fumbles while at Clemson.

Grady Jarrett is only 26, so will get another chance at another contract at 30. His $17 million average is only behind Fletcher Cox and Aaron Donald for interior DL in NFL. Jarrett hasn’t been voted to a Pr Bowl nor had more than six sacks in a season. But he now has cashed in.

Source confirms the @AdamSchefter number of $68 million over four years for Grady Jarrett. Judging by Twitter, it seems some folks are shocked this got done. That kind of surprises me. The Falcons are one of the few teams with an owner who will spend to keep his guys in town.

With DT Grady Jarrett locked up for the next four years, the #Falcons will turn their attention to a deal with WR Julio Jones. That might take a while, I’m told, but it’s now their most pressing priority. Jones has said publicly he believes in owner Arthur Blank getting it done.

I'm old enough to remember when Grady Jarrett didn't get drafted until the 5th Round because he was "too short".