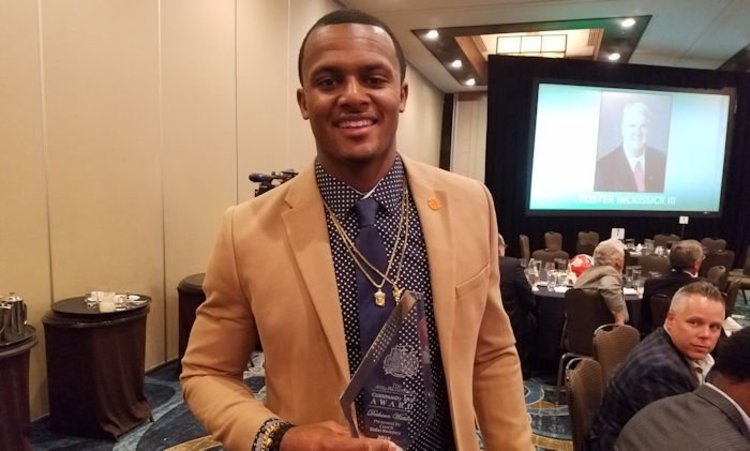 GREENVILLE, SC - The South Carolina Football Hall of Fame (SCFHOF) scouts the college talent from or in South Carolina. The best 25 of these players in the country are listed on their ballot for the Collegiate Player of the Year presented by Hale's Jewelers. Voting is open from now until December 11, 2016.

This is the fourth year for the annual award. The award is presented at the organization's Induction Ceremony on the Thursday after the Heritage (April 20, 2017). Watson earned the honor last year and Clemson coaches Dabo Swinney, Jeff Scott, and Brandon Streeter helped present the award. All finalists of the Collegiate Player of the Year Award are either from the state of South Carolina, or came to South Carolina to play at one of its 13 collegiate football programs.

The award is determined by the online votes of SC Football Hall of Fame supporting members, media, the SCFHOF Board of Directors, Advisors, & Executive Team on www.scfootballhof.org. This year's list of finalists include 25 football players based on their on field performance. Each of the 13 collegiate South Carolina football programs have at least one player represented on the list.

The mission of the SCFHOF is to honor South Carolina football legends, help players transition to life beyond the game, improve player safety and promote the game of football and South Carolina. The organization honors athletes, coaches, business, and media professionals connected to South Carolina who have made a significant and positive impact through football. It helps promote and support the game of football and those who play it. Their Business Connect program provides players with collective wisdom from football alumni to support and encourage their transition to life beyond football. They encourage the support of football and our community and annually present a Humanitarian of the Year Award.

2016 Collegiate Player of the Year Finalists