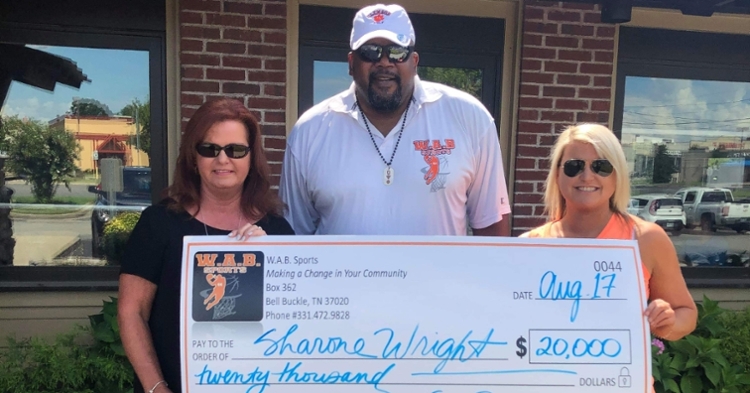 "That was our goal and we did it!," said Coach Buckingham who helped recruit Sharone Wright to Clemson University and was his basketball teammate from 1991 until 1994. "This means a lot to me personally because we have been like brothers for a long time. Over the last 10 years Wright has faced some major health challenges including battling cancer and recently dealing with MRSA which resulted in the amputation of his left leg.

"The entire day was amazing! During the award reception after the golf tournament, we also had a Zoom video conference which allowed Wright to see and hear from his former teammates, coaches, and other Clemson greats."

Buckingham recruited a noteworthy celebrity group for the event that was played with social distancing and other rules to prevent the spread of the COVID-19.

“I want to thank all the Clemson greats who came back to be a part of this and help out a fellow Tiger," he said. "It was rewarding to see so many Clemson Hall of Famers from all over the country.”

Over 20 former Clemson student-athletes and coaches took part, including 14 members of the Clemson Hall of Fame.

"I also want to thank everyone who played in the tournament and contributed to this cause," said Buckingham. "It was a great example of what the Clemson family is all about. We had a number of people who could not attend the golf tournament, but they still made a financial contribution and I can’t thank them enough."

Buckingham plans to hold the W.A.B. Sports Celebrity Weekend Golf Tournament on an annual basis. The future event will be to help a former Clemson student-athlete in need and to establish a scholarship fund. He has already set the date for June 7, 2021, so mark your calendars. Future tournament dates are:

W.A.B. Sports was created by former Tiger Wayne Buckingham. The company hosts youth clinics with an emphasis on life skills and the fundamentals of the sport, including the benefits of nutrition and concussion protocols. It also supports community service projects and other special events through fundraising activities.